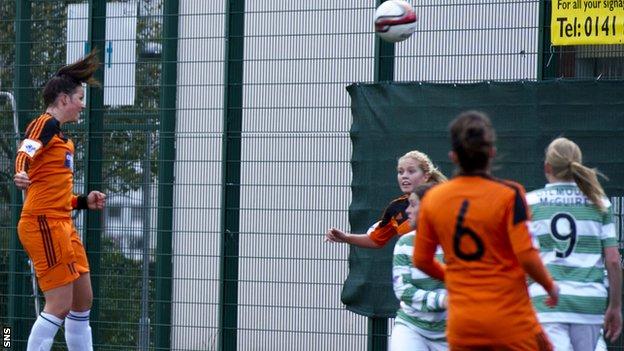 Glasgow City striker Suzanne Lappin is hoping to score her 200th goal as City look to knock Standard Liege out of the Women's Champions League and set up a last-16 meeting with Arsenal.

Lappin, 27, scored twice in Glasgow's in Belgium, then on Sunday bagged another brace in a 3-1 Scottish Premier League win against Celtic.

Victory saw City crowned SPL champions for the seventh successive season, while Lappin's two goals took her tally to 199 in 228 starts for Glasgow.

Now she wants that landmark 200th goal and a win against Standard that would almost certainly mean a meeting with Arsenal.

Both Arsenal and Glasgow play their second legs on Thursday and ex-Liverpool and Chelsea player Lappin said: "It would be great to play Arsenal in the next round, but we've got to get there first and we're not thinking that far ahead.

"We'll go into our game on Thursday feeling quite confident after getting two away goals in the first leg, but we weren't at our best and I think we'll have to improve if we are going to get through.

"On a personal note it was great to get both of our goals and to score another couple on Sunday, but on Thursday it's not about me it's about Glasgow City getting into the last 16 and if I were to score it would just be a bonus."

It would be great to play Arsenal in the next round, but we've got to get there first and we're not thinking that far ahead.

By the time Arsenal and Glasgow play their second legs Britain could already have a representative in the last 16 as Birmingham City will be favourites in the home leg of their clash with Finnish side PK-35 Vantaa.

Blues won their away leg 3-0 and will be expected to complete an aggregate victory on Wednesday.

But England winger Karen Carney, Blues' most experienced player, will warn against complacency.

"The tie is definitely not won yet," insisted Carney. "Vantaa looked a decent side and we won because our finishing was better than theirs.

"We were a bit sloppy at times and we'll have to cut that out, but if we do that and keep our concentration for 90 minutes we'll hopefully come through."