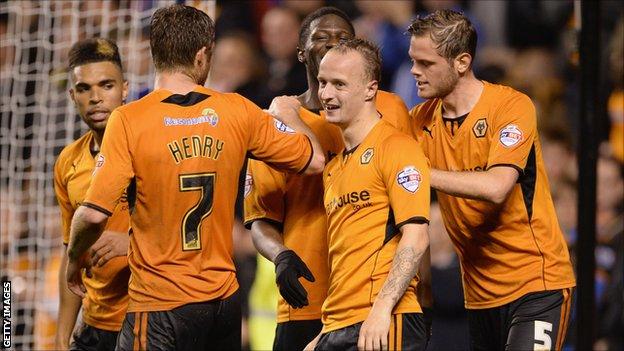 Wolves made light of torrential rain at Molineux to see off Oldham Athletic and move within three points of the top of League One.

Second-half strikes from James Henry and Leigh Griffiths both owed much to almost unplayable conditions.

Jonathan Grounds then slipped as he tried to cut out Sako's pass, allowing Griffiths to coolly run on and score.

The Wolves top scorer's low left-foot shot slid in off the right post for his ninth goal of the campaign.

Despite the disappointment of playing in front of their lowest league crowd in 13 years, Wolves closed the gap on joint leaders Leyton Orient and Peterborough United to three points, with a game in hand.

In a first half ruined by a freakish storm, Oldham wasted their best chance when Cristian Montano ballooned a header over.

Wolves keeper Carl Ikeme then saved from Montano after the break before Danny Philliskirk powered a fierce shot just over.

But Griffiths should have made it three, running clear late on, only to slide his shot just wide.

"Sako has contributed well to the season so far. He made some telling assists which helped us take the points. I don't think anyone can question his commitment when he has worn the Wolves shirt.

"We have lost one game in 12 now. That is keeping us in touch with the pace at the top of the table.

"The top two have had a fantastic run. In the end you do have to concentrate on your own team and your own result. But everybody looks at the other results.

"And, when you see Coventry beat Orient 3-1, it puts Saturday into perspective. It shows it was a good performance against Coventry on Saturday when we might have just edged it between two good teams."

"We had six or seven that I thought were fantastic tonight and they deserve to be towards the top end of the table. The others have got to come with us and come with the group.

"Everybody's giving it 100% but sometimes it's a bit of experience, bravery and handling the occasion. We were unlucky but we go again."