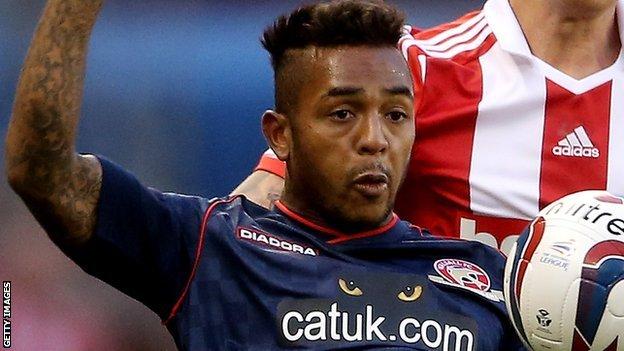 Goals from Ashley Hemmings and Sam Mantom gave Walsall victory at Swindon, consigning Mark Cooper's side to a first home league loss of the season.

Hemmings gave Walsall the lead with a shot from outside the area while Mantom doubled their lead from close range, before later hitting the crossbar.

Walsall sealed the points when Hemmings grabbed his second of the night with a neat finish from 12 yards.

Nile Ranger grabbed a late consolation for Swindon with a close-range header.

Walsall's fine away form has helped to lift Dean Smith's men into the League One top six for the first time this season.

The Saddlers have now gone five league games without defeat on the road, including victories at Crewe, Wolves and now Swindon, as well as enjoying the mantle of being the first team to take points off leaders Orient this season.

"I don't think there are many positives to take from it, if I'm honest.

"They put an extra man in midfield which made it difficult for us to get on the ball.

"If we start kicking the ball forward I guarantee we'll be in the relegation zone at the end of the season because that's not how we play.

"We've not got the players to do that. We're a footballing side but today it was about concentration."

"For the first goal, when the ball came out, I just thought 'hit it first time'. When it hit the back of the net I was buzzing.

"The second one was a great team goal. I just took a touch and slotted it home.

"I nearly had three and to be honest I thought the shot which went just wide was going in. But I'm happy with two.

"Last year wasn't so great, I was in and out of the team. This season I just wanted to secure my place and do well for the team."