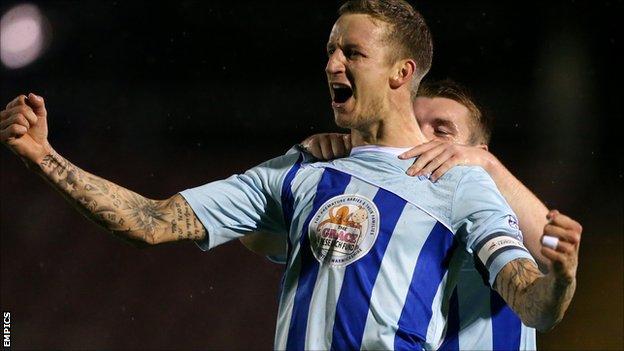 Coventry's Carl Baker scored one goal and created another to end Leyton Orient's unbeaten start to the season.

The Sky Blues captain gave the hosts a 10th-minute lead with a fierce left-foot shot from 25 yards.

Joe Murphy then made a great penalty save to deny David Mooney a second-half equaliser, before Franck Moussa doubled the Sky Blues' lead with a superb chip.

Coventry City are still to attract a 3,000-plus crowd to their temporary home in Northampton as the majority of Sky Blues fans' boycott of home games goes on. The average attendance for their seven games so far is 2,174, the Brentford game (2,650) being their highest, while the 1,789 who turned up for the Colchester United game is the lowest 'home' gate in the Sky Blues' history.

Lasimant got on the end of a Scott Cuthbert header to pull one back in the third minute of added time.

Having begun the season with a 10-point deduction, Coventry's seventh win in 13 League One games this season moves them to 14th in the table, while Orient remain top on goal difference.

Clarke's goal for the Sky Blues was ninth of the season, now just one behind his team-mate, joint League One top scorer Callum Wilson, whose best effort was turned aside by Orient keeper Jamie Jones.

Belgian midfielder Moussa's dribble, followed by an exquisite angled chip from 15 yards over Jones, was his sixth goal of the campaign.

Murphy's 57th-minute penalty save, diving low to his right to hold onto Mooney's spot-kick, came after Shaun Batt went down under a challenge from Jordan Willis.

"We keep getting better and better and, if we carry on doing that, we can be a threat for any side.

"I was concerned for my players as Orient play at an incredible pace and have been extremely impressive this season.

"But they just go to another level. They were incredible. I asked them for another response and it was an incredible one.

"There is a great unity to the group and performances show that. Every player is playing with fantastic commitment at the moment."