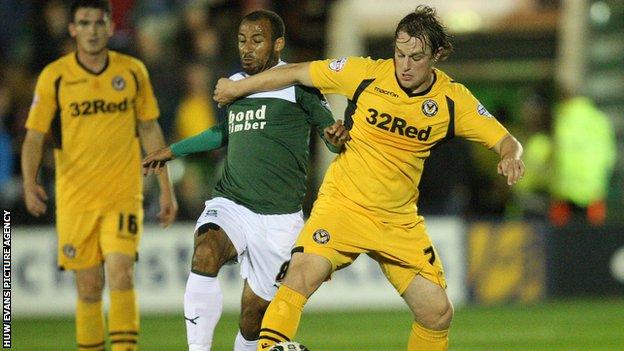 A 10-minute delay because of floodlight failure was the highlight of this dour contest between Plymouth Argyle and Newport County.

The game was stopped in the 74th minute after one light went out during this goalless draw at Home Park.

The game resumed when it was repaired but neither side looked like coming away with the points.

Newport's Ryan Jackson and Plymouth's Lewis Alessandra had shots on target in a game played in torrential rain.

This was another draw for Plymouth and adds to the growing pressure on manager John Sheridan.

Exiles manager Justin Edinburgh will have been disappointed his side failed to build on the 3-0 victory over York on Saturday.

"We are delighted with a point again on the road. It was a solid performance, rather than spectacular.

"We have come to a big club and one we look up to and we were worthy of the point, but I don't think we did enough to win the game.

"We huffed and puffed and just the final ball wasn't there.

"I felt we could have played on (during the floodlight failure), but that was the ref's decision and they (Plymouth) were adamant the lights were going to come back on."