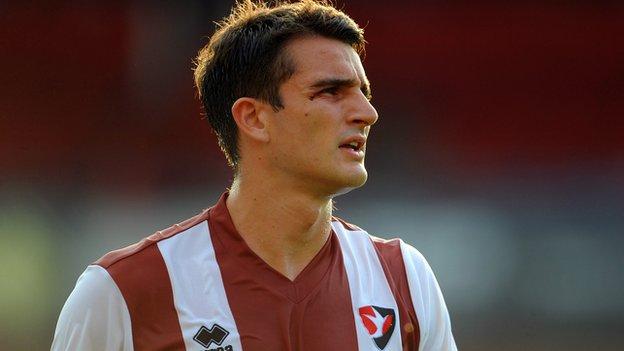 Matt Richards put the Robins in front with a curling 30-yard free-kick in first-half injury time.

Morecambe captain Mark Hughes was then sent off two minutes after the break, receiving a second yellow card for a tackle on Sam Deering.

Richards had a penalty saved by Barry Roche before Gornell added a second and Harrison made it 3-0 late on.

"It was a great three points. I think we were under a bit of pressure after Saturday.

"I think it was a blessing in disguise to have a Tuesday game.

"That's what you want after being defeated on Saturday [against Rochdale]. You want a game as soon as possible.

"We got a result and we got a performance as well with it."

"It's massively disappointing. We keep saying we're never too high and never too low, but it's hard to take.

"We came with a plan and we started the better side. We know they're under a little bit of pressure because they've only won once at home. Their crowd was muted and we kept it that way.

"Obviously the sending-off at the start of the second half made it hard for us, but there are plenty of positives. We've just come off the back of a nine-match unbeaten run and I've told the lads to get their chins up."