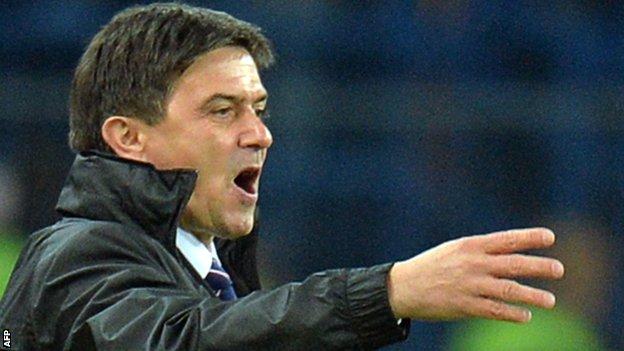 Poland boss Waldemar Fornalik has warned England his side will go out "fighting" in Tuesday's final World Cup Group H qualifier at Wembley.

England need a win to be certain of qualification for Brazil 2014, while Poland's 1-0 defeat in Ukraine on Friday ended their hopes.

"We want to leave a very good impression," he said. "You can expect some fighting spirit from us.

"There are no games for nothing here and we always want to win."

England know that anything other than a win will probably leave them needing to win a two-leg play-off to qualify because Ukraine, who are just a point behind in Group H, are likely to beat group strugglers San Marino, who have lost all nine qualifying games, conceding 46 goals in the process.

Poland will be supported by around 18,000 fans in London as they look to end their qualifying campaign with victory.

Fornalik, 50, believes the support will be of great help to his side.

"There will be so many Poles in the stadium, both travelling from Poland and those that live here, and that will certainly give some extra motivation for the team," he said.

"It will be of significant importance to us to have so many fans in the stands. We missed our support in Ukraine for certain reasons.

"Polish fans have a record of lifting up and supporting the team in good times and bad times, so we expect some massive support."