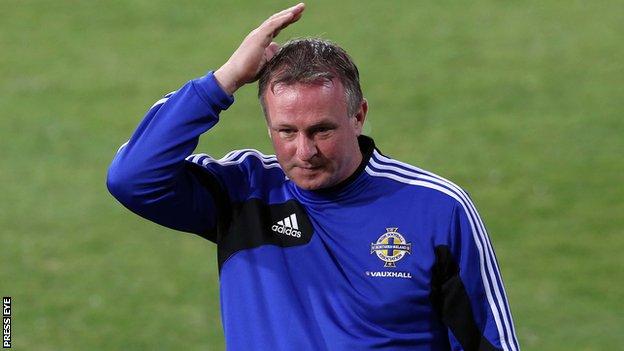 Northern Ireland manager Michael O'Neill has warned that there will be no quick fix to restore the country's international fortunes.

"We have to put a structure in place that allows us to develop international teams," said O'Neill.

"I think it's fair to say we don't have that at this minute in time."

Northern Ireland are currently 86th in the world rankings and another defeat in Tel Aviv will probably see them dropping further when the updated Fifa ratings are announced later this week.

All in all, it's far cry from the early 1980s when Northern Ireland qualified for successive World Cup finals in Spain and Mexico.

The 1986 World Cup remains the last occasion when Northern Ireland secured a place at a major tournament.

Despite his team's struggles in the World Cup campaign, the indications are that the Irish FA will offer former Shamrock Rovers manager O'Neill a new contract for the upcoming European Championship qualifiers.

O'Neill, 44, believes that the home win over Russia in August and last year's superb away draw in Portugal did hint at "green shoots" and hopes to be given the opportunity to work further with the squad.

"The job is not just about 10 qualifying matches. I think there are international managers who do it on that basis, but I certainly haven't done it like that," added O'Neill, who was appointed to the Northern Ireland job in December 2011.

"I think people sometimes overlook the size of the country we are, the number of players we have to choose from.

"What people perceive as 'minnows' is sometimes down to a lack of knowledge about international football.

"We've just come from a country like Azerbaijan, which people perceive as a minnow.

"When you look at their facilities and the level of investment in football, you think we need to produce more players."

O'Neill points out that Shane Ferguson and Daniel Lafferty are the only home-grown players that he has been able to bring into the squad during the current campaign, with the remaining new players available because of the eligibility rules.

"That's something as an association and as a country we need to address pretty dramatically."