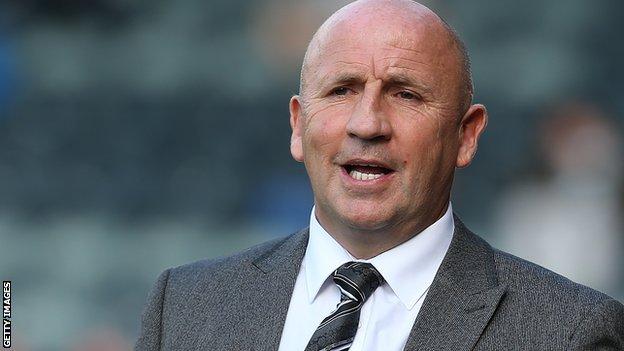 Former Accrington and Rochdale manager John Coleman has revealed he will apply to become the manager at Bury.

Kevin Blackwell was fired after a run of six games without a win and the Shakers have put assistant manager Ronnie Jepson in caretaker charge.

Coleman has been out of work since he was sacked by Rochdale, following a 12-month spell in charge at Spotland.

"I'll go on like everybody else and try my best to get the job," the 51-year-old Coleman said.

I made a couple of mistakes at Rochdale and I think I've learnt from them, but I can't detract from what I did at Accrington. I hope my time at Rochdale hasn't blotted my copybook.

"I know League Two like the back of my hand, I've managed a lot of games in League Two and had a bit of success fighting at both ends."

Coleman moved to Rochdale after spending 13 years with Accrington Stanley, making him the third longest-serving manager in English football at the time, behind only Sir Alex Ferguson and Arsene Wenger.

He could not save Dale from being relegated from League One in his first season and after a poor run of form was sacked in January.

Coleman, and assistant manager Jimmy Bell, helped Accrington move up from the Northern Premier League back into the Football League and reached the League Two play-offs in 2010/11.

"I'm climbing the walls, it's been a hard nine months and I'm desperate to get back in," Coleman told BBC Radio Manchester.

"I made a couple of mistakes at Rochdale and I think I've learnt from them, but I can't detract from what I did at Accrington.

"It's amazing because 18 months ago I would have probably been one of the favourites for it, I hope my time at Rochdale hasn't blotted my copybook.

"I possibly had the opportunity to go back to Accrington last season but Leam Richardson was a good friend of mine and a player for me.

"He gave me great service so there is no way I was going to stab him in the back, so I declined that."

The former Bury midfielder Nick Daws, who is now on the coaching staff at QPR, has told BBC Radio Manchester he is not interested in the role.