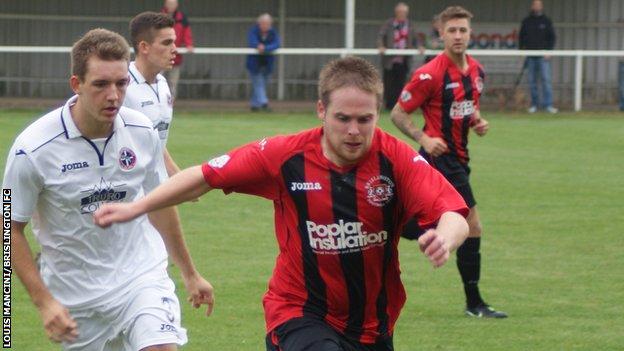 Brislington manager Jeff Meacham says the club are "living the dream" after progressing to the fourth qualifying round of the FA Cup for the first time.

The Bristol club play in the Western League Premier Division - the fifth tier of non-league.

They will face Conference Premier side Welling on 26 October and a win will see them reach the first round proper.

"Everyone will be thinking about progressing and our chairman says it's like living the dream," said Meacham.

Brislington in the money

Brislington work on a budget of around £350 a week but have already earned approximately £20,000 in prize money and gate receipts from their FA Cup run.

"But my feet are firmly on the ground," he told BBC Radio Bristol.

"We know how hard it will be against Welling but it will be a dream come true if we could be one of the Bristol clubs in the first round."

Brislington started their FA Cup journey in August, in the extra preliminary round, and have since won six games.

Having secured a memorable victory over Southern League Truro, they went on to beat Conference South outfit Western-Super-Mare 3-2 on Saturday.

"Everyone is talking about the money it can generate. It can set them up for a few years, definitely," added Meacham, a former Bristol Rovers player.

"Obviously it will be a hard task but it's the FA Cup - who knows what could happen?

"If we have a little bit of a luck and work hard enough then hopefully it will be our turn to get in to the first round proper."