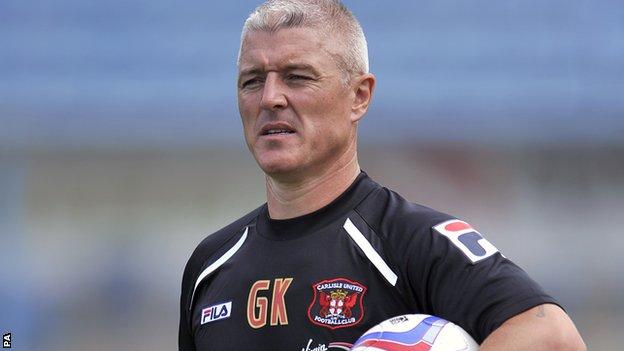 Carlisle manager Graham Kavanagh wants a deal with Liverpool for some of their youngsters to train with the Cumbrians.

"It's something I'm trying to do as I know [Liverpool coach] Mike Marsh," Kavanagh told BBC Radio Cumbria.

"We're hoping for a situation where if there are players on the periphery of their under-21s, then we could have a little bit of a look at them."

The Liverpool lads would already know us and we'd have seen them first-hand. It would put us ahead of the game if they become available

Since then, he has made one addition to the Carlisle squad with the loan signing of 22-year-old Blackpool striker Nathan Eccleston - a Liverpool academy graduate.

"Like with Craig and Jakub, where Liverpool are undecided on them, we really give ourselves a platform going forward," Kavanagh added.

"The lads would already know about us and we would have had a first-hand glance at them so it really puts us ahead of the game if these players become available.

"Next summer we definitely want to freshen up our youth team. We need some players in behind the first-team that we can then develop and improve so there's a little more focus on long-term planning."

Meanwhile, the Cumbrians have confirmed former France defender Pascal Chimbonda is currently training with the club.

The 34-year-old, a team mate of Kavanagh whilst the two were at Wigan and Sunderland, was offered a contract by Conference North side Colwyn Bay in August after playing for them in pre-season.