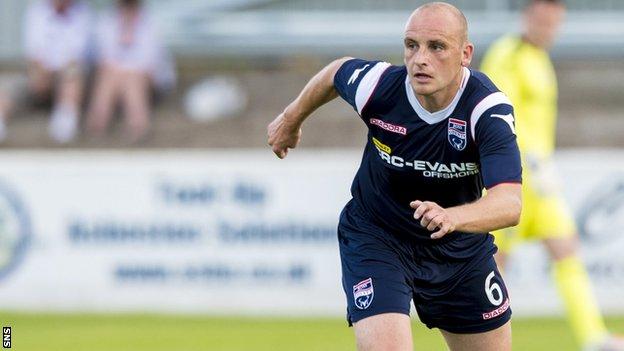 Defender Grant Munro has left Ross County "to pursue a career outside football", the club have announced.

Munro has stared six of County's 10 games this season but realised he would be understudy to Brian McLean and Scott Boyd in central defence.

Manager Derek Adams told the County website that Munro was leaving the club "with our club's best wishes".

"Grant had a terrific two years with the club, winning the First Division Championship and finishing fifth in the SPL last season," said the manager.

I wasn't going to go beyond the summer anyway, so it gives me a few months' head start to go into a new career

Munro said his decision had been reached after talks with the manager and director of football George Adams.

"When you turn 30, your mind looks to the end of your career and the next stage," he told Moray Firth Radio.

"We have another kid on the way as well, to make it three, so that enhances it.

"I asked the manager if my time was up and we both came to the agreement.

"He didn't want to stand in my way if that's how I felt, so credit to the manager and George for getting things done so quickly.

"Everyone knows when it's time for change. I wasn't going to play as much as I wanted to.

"I need to go into the world now and the next part of my career.

"I wasn't going to go beyond the summer anyway, so it gives me a few months' head start to go into a new career."

Munro was part of the Inverness team that reached Scotland's top flight for the first time in 2004.

After relegation in 2009, Caley Thistle won promotion back to the division the following year.

However, towards the end of their first season back in the top flight. it was announced Munro's contract would not be renewed.

He joined County that summer and helped Adams' side win promotion to the Scottish Premier League and achieve a top-half finish in their maiden top-flight campaign last season.