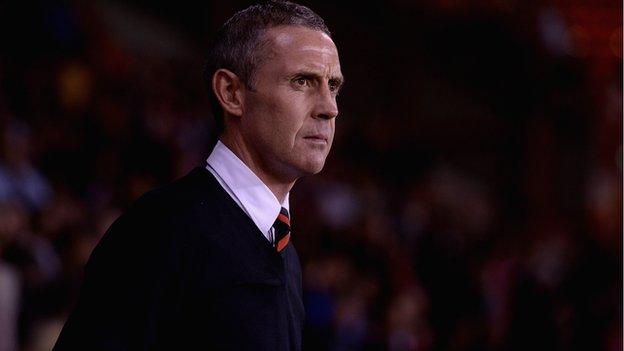 Former Sheffield United manager David Weir has said he has "no complaints" about his sacking.

The 43-year-old was relieved of his job at Bramall Lane on Friday after winning just two of his 13 matches in charge of the south Yorkshire club.

"I've got no complaints because I went in with my eyes open.

"I felt like the players were on board with what we wanted, but we just didn't get the breaks," the former Scotland international told BBC Radio 5 live.

"I don't think 10 league games is long enough to get your ideas up and running, but I understand because results were poor and people start to get worried.

"I thought we were at the start of something that would be a long-term project and could be successful. I'll only take positive things from my time there."

The former Everton and Rangers defender took over at the League One club in June, his first job as a manager, and won his opening league game against Notts County.

However, his only other success came via a penalty shoot-out against Scunthorpe in the Johnstone's Paint Trophy, and after exiting the same competition after a 1-0 home defeat by League Two Hartlepool and with United sitting 22nd in the league he was sacked along with assistant Lee Carsley.

Weir now believes they both need to take time out to reflect on their time at the club before getting back into football.

"I think it's important for Lee and I to speak about what went on," he added.

"We need to look a the positives and the negatives and what we've learned. To jump straight back in would be difficult.

"We'll definitely be better coaches for it and we'll look to put what we learned into practice."