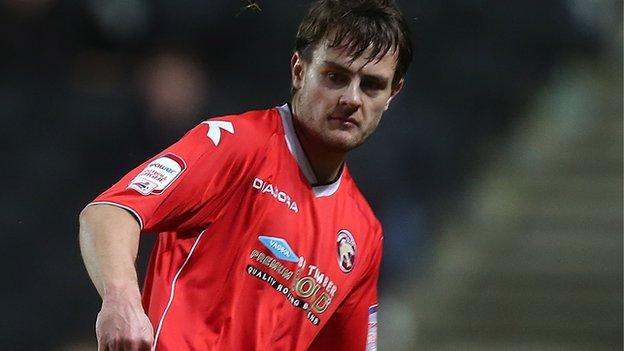 Walsall full-back Andy Taylor is sure that success will come for the promotion-chasing League One side if they can keep playing stylish football.

Taylor's stunning 96th-minute free-kick rescued a point at Colchester on Saturday for the Saddlers, who have now won just twice in 11 matches.

But Taylor insists: "We know if we keep playing like that we'll win more games than not.

"We really enjoy the style we play. But you have to work," he told BBC WM.

"There's a million and one ways to win football matches, but this is the way we want to play. We believe in it.

"To come away with a defeat at Colchester would have been very harsh.

"I've not played in many games as one-sided as that, especially away from home.

"We were camped in their half, but just could not find a finishing touch."

In the end, Taylor's curling free-kick, his first goal in more than five years, rescued a point and extended their unbeaten run away from home to four games in League One.

That result followed the Saddlers ending leaders Leyton Orient's 100% record on their previous away trip.

Yet Dean Smith's side have only claimed two wins, at Crewe and Wolves in the space of four days, since beginning the season with three victories in a row.

Admittedly, only five of their 14 games have been at the Bescot Stadium, with all three of their ties in the Capital One Cup and Johnstone's Paint Trophy on the road.

But they have not won at home since the first day of the season - and have now dropped to 10th, although they are still only three points adrift of the play-off zone.

"It's about consistency," added Taylor. "A lot of teams, ourselves one of them, feel they can make the play-offs.

"If you can put a run together you can shoot up the table.

"Look at last season. We went 14 without a league win and you think you've got no chance and then, all of a sudden, you start creeping up and you turn it round."