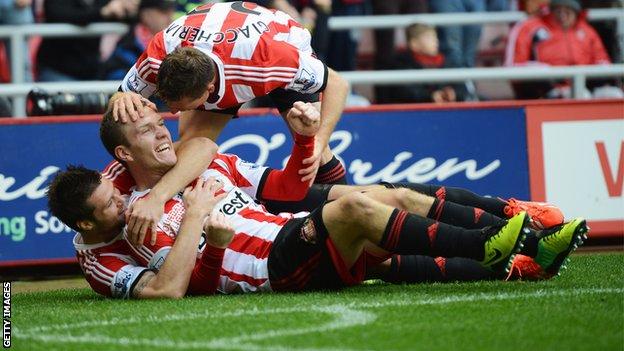 Sunderland's Craig Gardner says the squad have been encouraged to "play with a smile" by new manager Gus Poyet.

Gus is going to give us all a chance and I hope that goes for Bardo, because there's no doubt he's a top-class defender

"The new gaffer has come in and told us to enjoy training and now everyone is having fun, but working hard as well," Gardner told BBC Newcastle.

"Anyone with a job would tell you that you only get your full potential when you are actually enjoying what you do."

Former Brighton chief Poyet has arrived at the Stadium of Light with the side bottom of the Premier League, having picked up one point from seven matches.

However, under caretaker boss Kevin Ball, Sunderland beat Peterborough to progress in the League Cup, before encouraging displays against Liverpool and Manchester United yielded no return.

"Obviously we can't smile too much if you look at the league table," Gardner continued.

"But there's a bit more buzz around after how we've played recently and there's excitement for the next game [at Swansea on Saturday]."

The Birmingham-born 26-year-old was signed for £6m in 2011 by then Black Cats manager Steve Bruce after scoring 10 goals for Birmingham City the previous season.

But, since arriving on Wearside, he has often been deployed as full-back - a position he has filled more frequently this term after right-back Phil Bardsley was suspended by the club for comments posted on social media site Instagram.

"Gus tells us what he wants from us but he also asks the players where they think their best position is," Gardner added.

"Obviously I'd prefer to be playing in central midfield and he's going to give the players a chance - that's what everyone deserves.