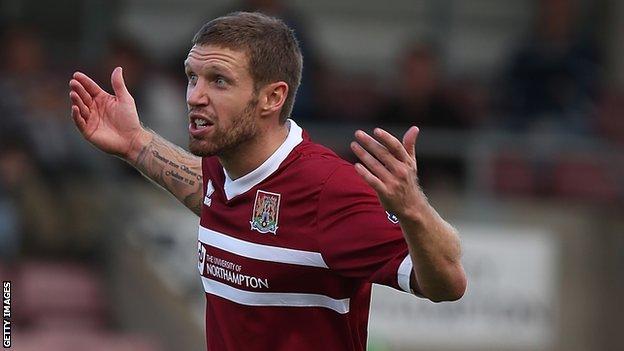 Northampton Town defender Paul Reid has told his team-mates to stop believing the relegation zone is a "false position" for his side.

"There's a lot being said about us possibly being in a false position," Reid told BBC Radio Northampton.

"We can't really buy into that. The league table says what it says. We are where are because of the results."

Hopes had been high of at least achieving another top-seven finish at Sixfields this season, with boss Aidy Boothroyd redeveloping his squad over the summer.

Signs of a recovery - following clean-sheets in a 0-0 draw against Morecambe and a 2-0 win over AFC Wimbledon - were undone at the weekend with a 2-0 loss at Oxford.

"It's up to us to stop saying we're in a false position and go about proving we are by picking up wins," added 31-year-old former Scunthorpe centre-half Reid, whose side face Dagenham & Redbridge on Saturday.

"Before we start talking about false positions and being up near the play-offs, we need to be realistic as well.

"We're second bottom after 11 games. My first thought would be to get away from that and then getting up the table."