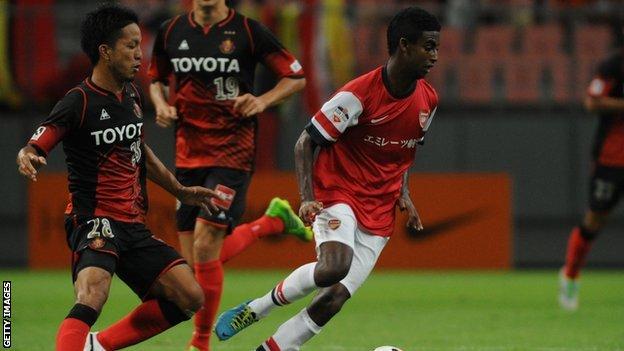 Ethiopia are hopeful Arsenal's German-born midfielder Gedion Zelalem will choose to play for them.

The 16-year-old is eligible to play for Germany, Ethiopia - where his father was born - or the United States.

Central midfielder Zelalem arrived at Arsenal in January and quickly made a big impression, starring in the club's pre-season tour of Asia where he played in all four games in Indonesia, Vietnam and Japan.

He also played in the Emirates Cup and the Germany youth international was named in Arsenal's first-team squad for this season, although he is currently out with an injury.

Ethiopia are keen for the highly-rated youngster to pledge allegiance to the Walyas but coach Sewnet Bishaw told Reuters he would not contact the player personally.

"If he decides to play for Ethiopia and asks us, then things will be easy," said Bishaw.

Meanwhile, Ethiopia will play the second leg of their World Cup play-off against Nigeria in Calabar on 16 November. The aggregate winners of the tie qualify for next year's finals in Brazil.