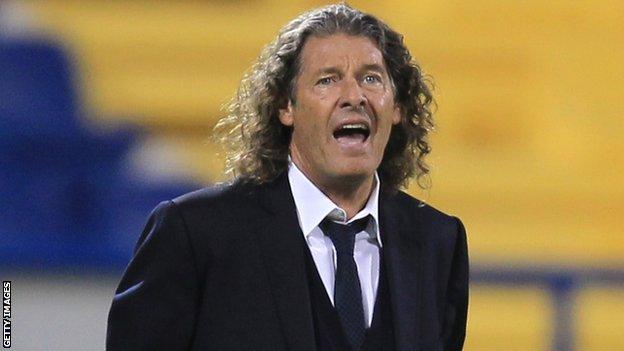 Metsu had told French sports newspaper L'Equipe in July that he had been diagnosed with terminal cancer.

"It's a great loss for Senegal. Bruno Metsu not only marked Senegalese football but the entire history of Senegal," Senghor said.

He was really passionate about football; he'll leave the memory of a winner who succeeded on all continents

Metsu took charge of Senegal in 2000 and two years later he helped the country cause a sensation at the World Cup in South Korea and Japan when they beat reigning champions France in the opening match.

He steered them to the last eight where they lost 1-0 to Turkey.

Only months before that, Metsu had guided Senegal to their only appearance in the final of the Africa Cup of Nations where they were beaten on penalties by Cameroon.

After his successful spell in charge of Senegal, Metsu went on to coach several clubs and nations in the Gulf region, notably winning the Gulf Cup with the United Arab Emirates in 2007.

He stood down as coach of Dubai first division side Al Wasl in October because of poor health.

French club Lille, where Metsu played from 1979-81 and coached from 1992-93, said: "It is with great sadness that we have learnt of the death of Bruno Metsu.

"Lille, its president Michel Seydoux, and all the players and staff at the club, as well as the fans, offer their sincere condolences to his loved ones.''

French Sports Minister Valerie Fourneyron paid tribute to a man who would be remembered as someone "who never gives up, this tireless globetrotter of football who always pushes others to exceed their limits".

And French Football Federation (FFF) president Noel Le Graet added that Metsu's legacy was above all that of a winner.

"He was really passionate about football," he said. "He'll leave the memory of a winner who succeeded I'd say on all continents with mad passion, a desire to win, consistency.

"An important personality from French football has left us. He gave the impression of a man able to convince others that French football had values. He was an example to follow in his convictions and the missions he undertook."