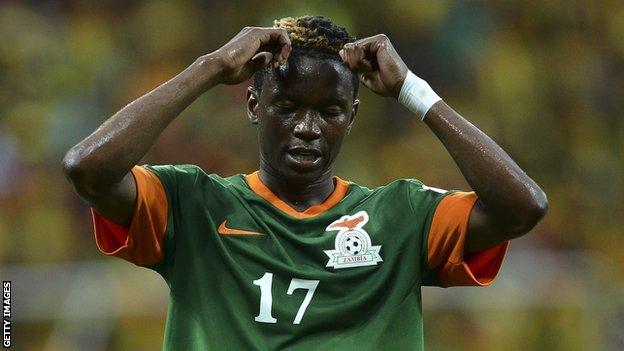 Zambia has issued arrest warrants for three international players who missed the 2-0 friendly defeat by Brazil in China.

DR Congo club TP Mazembe insisted Rainford Kalaba, Stoppila Sunzu and Nathan Sinkala were injured, leading to a dispute with the Zambian FA and the involvement of the Zambian government.

After examining the players in Lusaka, the Zambian FA said they should still travel to Beijing, but Mazembe requested their return.

That led to the intervention of the Zambian government, who took away the players' passports so they could not go back to their club in Lubumbashi.

However, reports claimed that the players had managed to cross the border between the countries and were back in DR Congo.

"They say the players crossed the border, but it is not true," TP Mazembe owner Moise Katumbi told BBC Sport.

"Mazembe's job was to send the players to Zambia in order for them to check whether they were injured - but they were never examined."

The Zambian FA has written to football's world governing body Fifa, complaining that Mazembe did not release their players as they are required to do for international dates.

It is a claim that Katumbi categorically denies.

Zambia lost the match in Beijing thanks to goals from Oscar and Dede in the countries' first ever meeting.

The 2012 Africa Cup of Nations champions were playing their first game under 35-year-old interim coach Patrice Beaumelle, who took over eight days ago after Herve Renard left the job.

Zambia failed to qualify for next year's World Cup having been eliminated from qualifying at the group stage.