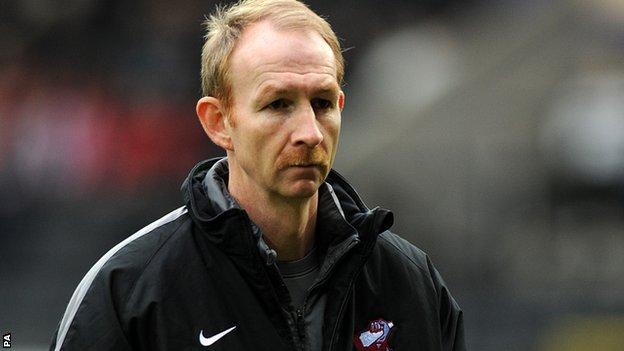 Torquay boss Alan Knill has said his struggling side need to start producing performances when it matters.

The Gulls lost 3-2 to Wycombe on Saturday and are one point above the relegation zone in 22nd place after five defeats in six games.

"I've got a good group of players and an honest group but I need more than honesty," he told BBC Radio Devon.

We can't wait for everyone to come back, especially defensively

"It's no good being excellent Monday to Friday. We're judged on a Saturday and we weren't good enough."

He added: "I could make excuses that we were missing players but it wasn't good enough."

"We can't keep conceding as we are - if players are putting it in the top corner from the edge of the box then fair enough but we gave away three poor goals."

Torquay have conceded three goals in their last two games and with 21 goals against them in League Two, the injury-hit Gulls have the second worst defensive record in the division.

"It's really tough to take," said Knill. "I keep saying every week that we're playing well but it's about the penalty areas - when you score two away from home you should be winning the game or certainly not losing.

"We can't wait for everyone to come back, especially defensively. We're suffering a little bit. Offensively we look OK but we're getting caught at the back at the wrong times."