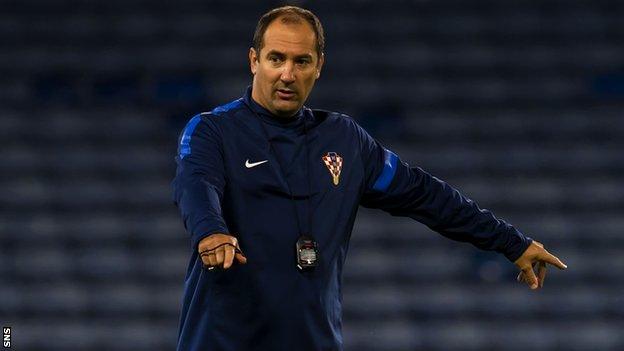 The Croatia coach thinks Scotland's 1-0 win over his side in June turned Group A in favour of Belgium.

"You can expect good things with Gordon as the manager," said Stimac. "He is a key man for your success.

"You can already see that he is constructing the team for the next qualifiers."

Scotland sit second bottom of the group as they looking to confirm their place in the play-offs as one of the best group runners-up.

Missing out on Brazil 2014 means that Scotland have not reached a major finals since the 1998 World Cup in France.

And Stimac has detected an improvement in performances since Strachan took charge after a poor start to the campaign under Craig Levein.

"Before him, you didn't look well to be honest," the Croatia coach said of his Scotland counterpart.

"I wasn't happy that the last manager was going and Gordon came in.

"I knew that changes would be made and your team would perform in a different way and he is putting things in the right place.

"I am quite sure that Scotland will be tough opponents in the next qualifiers.

"Gordon is a great guy, a great character. I know him from his Coventry days, the 1995/96 season.

"Looking at the Scottish team now, I would say that you are on the right track."

Croatia have guaranteed themselves second place behind Group A winners Belgium and, barring a bizarre series of results, will be in the play-offs.

However, Stimac has come under pressure in his homeland for failing to win the group after his side began the campaign by winning five of their opening six games and drawing the other away to the Belgians, who then won 2-1 in Croatia on Friday.

Asked if the defeat by Scotland had been a turning point, the former Derby County and West Ham United defender said: "As far as we are concerned, yes. It was a very bad defeat for us.

"Unexpected I would say. Again, not meaning to disrespect Scotland, but we were clear favourites in that game.

"We did enough to win to be honest. We conceded a stupid goal and we didn't take our chances - that happens sometimes in football.

"We were sad after that because that was the turning point."