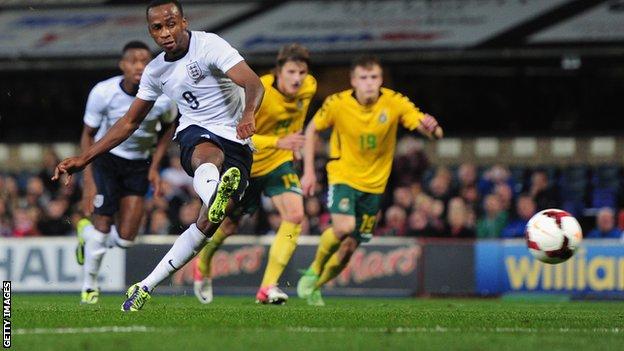 Ravel Morrison finished Wilfried Zaha's cross from close range for the opener, with James Ward-Prowse getting the second direct from a 20-yard free-kick.

Saido Berahino curled a third from the edge of the box, with Morrison's individual run bringing a fourth.

Under-21 Group One table

Berahino completed the scoring from the penalty spot as England moved above Wales on goal difference.

Gareth Southgate's side began the day third in Group One, but climbed above Finland, who lost 1-0 in Moldova, and Wales, who beat San Marino 4-0.

Level on 10 points with Wales, England have played two fewer games and are next in action when Finland are welcomed to Stadium MK on 14 November.

In order to qualify for the 2015 tournament in the Czech Republic, England must top the group and then win a two-legged play-off.

They moved to the summit with a dominant performance at Portman Road against a Lithuania side that did not pose a threat.

Zaha and Thomas Ince impressed in wide positions, but it was the performance of Morrison that stood out, the West Ham man full of creativity in a position just behind lone striker Berahino.

Morrison gave England the lead inside two minutes, his mis-hit shot finding the back of the net after Zaha had jinked his way down the left.

England doubled their advantage through Ward-Prowse's powerful free-kick after Morrison was fouled, but a 2-0 lead at the half-time was scant reward for the hosts' dominance of possession and territory.

The one-way traffic continued after the break, Berahino having a header saved from Ince's cross, the Blackpool winger then firing past the far post from the right edge of the box.

England eventually extended their lead when Berahino, played through by Zaha, classily finished from the left of the box before Morrison produced the highlight of the evening.

Collecting the ball just inside the Lithuania half, he saw off two defenders, rounded the goalkeeper and rolled home from the six-yard box before Berahino completed the rout from the spot after Jack Robinson was fouled in the box.