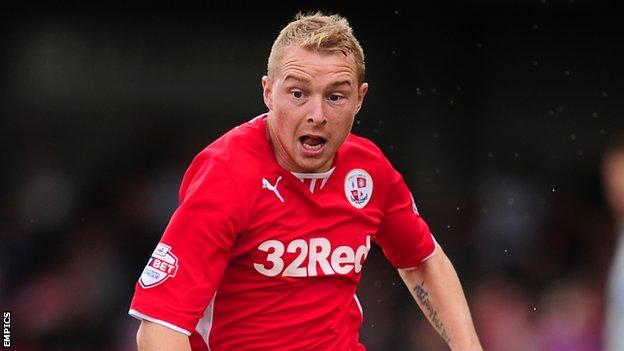 The 27-year-old has been an ever-present for the West Sussex club this season.

He told BBC Sussex: "The last 18 months I have been on top of my game. The gaffer gives me that freedom to go play, enjoy and express myself.

"I think I have seen the rewards. Every game I play I try and be dangerous and entertain, although you can't do that every week."

He added: "I love that role of getting on the ball and expressing myself. I thrive on it."

Adams was brought to the League One club last summer by ex-Reds boss Sean O'Driscoll, who is now in charge at Bristol City.

However, the former Rochdale man went on to play a central role in Barker's side, scoring 11 goals in 53 appearances in all competitions.

We know we have got a good team and the gaffer instils in us how he wants us to play. I think it works really well for us

So far this season he has found the net twice in 12 outings, but he is more than happy to be a creative outlet for the Reds.

"I have got a couple this year but I should be on five or six really," Adams said.

"I am not really someone who says 'I want to score lots of goals'. If I can help set the lads up to score goals then that is good for me as that is my job.

"My main thing is trying to set people up and create goals for the strikers. If I can keep doing that then I'd be happy but if I can chip in with a few more goals that'd be good."

Crawley finished 10th in League One last season and they are currently ninth in the third tier, having only lost twice this term.

"People on the outside might think Crawley are a smaller club compared to one of the ones we play," he said.

"We know we have got a good team and the gaffer instils in us how he wants us to play. I think it works really well for us.

"We have got a style of play that suits the players we have got and I think teams struggle to play against us."

Crawley return to action this weekend at home to Bradford City after their game last Saturday against Bristol City was postponed because of international call-ups.

"I think the break was nice," Adams said.

"We put a really good run of results together in the league although we had a disappointing game in the cup [the Johnstone's Paint Trophy defeat to Newport County].

"Going into the next two games we are refreshed, re-focused and we know what we have got to do.

"Results went for us at the weekend and we are still in and around the play-offs with a game in hand.

"It is only early days but you still want to be at the right end of the table."