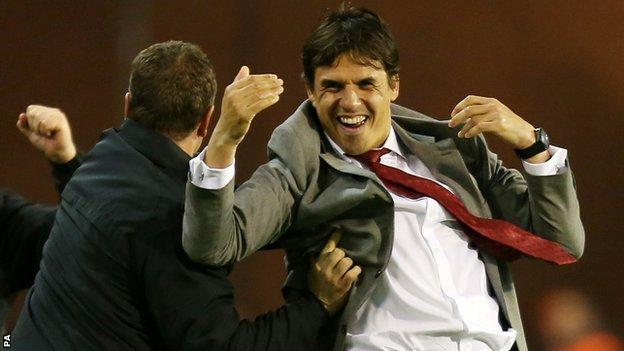 Chris Coleman does not expect his Wales future to be settled in the immediate aftermath of their 1-1 draw against 2014 World Cup qualifiers Belgium.

Coleman's contract expires in November and he said: "It's not something you give up lightly, being manager of your country."

Ahead of the clash against Belgium, Coleman admitted he remained undecided about whether he wanted to continue as the late Gary Speed's successor.

Wales were seeded sixth in Group A and finished fifth after three wins, a draw and six defeats.

Coleman was appointed in January 2012 on a two-and-a-half-year contract following Speed's death.

He was charged with guiding Wales through their 2014 qualifiers, but has been frustrated by injuries to key players Gareth Bale, Joe Allen, Joe Ledley and Adam Matthews.

Amid uncertainty over his future, Wales ended their campaign with a 1-0 win over Macedonia before drawing with Brazil-bound Belgium.

Coleman said: "If I had lost these two games, I wouldn't have been expecting to have been told I wasn't the man to take us forward.

"Equally, two great results does not mean I expect to be told I am the man to take us forward.

"I'm the same manager as I was last month. I never plan differently but, ultimately, it's about results.

"My contract ends in November and we have a friendly against Finland next month [November] and we will talk about it then.

"I just wanted our players to end the campaign strongly and we have finished in the right manner.

"It's not something you give up lightly, being manager of your country."

The 34-year-old provided the scoring pass to Ramsey and finished the game alongside the youngest player in Welsh history, 16-year-old Liverpool Academy midfielder Wilson - 18 years younger than Bellamy.

"It was an ideal way for Craig to sign off," said Coleman.

"That's twice in four days he has played that last pass for us to score a goal and I am pleased for Aaron too, his contribution to this camp has been immense.

"You always look at Aaron even when we are at full strength because of the quality he has got.

"With all the players we were missing there was even more pressure on him and he stepped up to the plate and was absolutely fantastic.

"We were up against the best team by far in our group. They are a magnificent team.

"We lost James Collins with injury and had to replace him with James Wilson. James is playing for Cheltenham, and at the same time Belgium were bringing on Eden Hazard who plays for Chelsea.

"That shows the strength in depth they have. They are a top quality side, and they deserved to win the group.

"But I thought our mentality was great, even though we had to ride our luck a bit at times and they could have scored more goals.

"We never gave up, we kept going and nicked a point at the end. I am really pleased for the players and supporters."