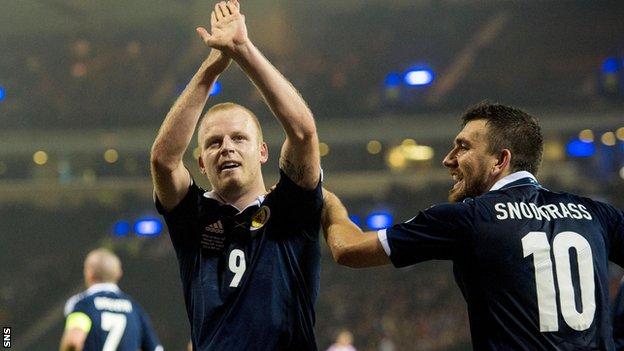 Goalscorers Robert Snodgrass and Steven Naismith both believe Scotland can qualify for the European Championship finals in 2016.

Snodgrass and Naismith netted as Croatia were beaten 2-0 at Hampden in the Scots' final World Cup qualifier.

"We've got to take great positives from this performance into the next campaign and hopefully we can get to a major tournament," said Snodgrass.

And Naismith added: "It is definitely a great performance."

Scotland's chances of reaching next year's World Cup in Brazil had been extinguished long before Tuesday's final Group A fixture but improved performances and results under new coach Gordon Strachan have boosted confidence.

Strachan took over from Craig Levein midway through the campaign and has led the side to three wins in their last four competitive matches - including home and away victories against Croatia.

And Snodgrass, who scored in both meetings with Croatia, praised Strachan's approach.

"The way we've approached this game and other games under him, we've looked positive," said the Norwich midfielder.

"We look as if we are going to try to win the game.

"They [Croatia] are a good side. We made them look quite ordinary at times the way we were popping it about in and about the box."

Naismith says Strachan has given the Scotland players renewed confidence.

"What the manager's done is told our players that we're good enough and to pass it and make the dangerous passes going forward," said the Everton forward.

"And we've shown over the last three or four games that we can and we kept the ball very well and created more than the two chances we scored.

"He wants us to to play football and believe that we can play against the best players in the world and, in the two Croatia games, we've shown that and a few more games in the group.

"It is a disappointment the way that we didn't give more of a fight in the overall campaign, but it's great things going forward and that's what we've got to believe."