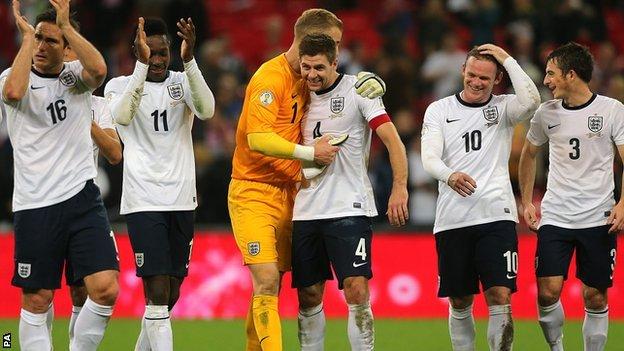 Prime Minister David Cameron led the praise for England after they secured qualification for the 2014 World Cup in Brazil with a 2-0 win over Poland at Wembley.

Goals from Wayne Rooney and Steven Gerrard ensured that Roy Hodgson's side finished top of their group.

Cameron said: "Proud to see England qualify for the World Cup in Brazil."

England needed a victory at Wembley to guarantee a place in next year's finals as nearest rivals Ukraine, who took second spot, thrashed San Marino.

Hodgson's side ended the campaign one point ahead of Ukraine, who now face a play-off to qualify for the finals.

England last failed to qualify for the World Cup in the United States in 1994 and went into the final two qualifiers with their fate in their own hands.

An impressive 4-1 win over Montenegro on Friday and Tuesday's 2-0 win over Poland sealed the Three Lions' spot in Brazil.

Terry Butcher, who captained England when they reached the 1990 World Cup semi-finals, said on ITV: "I'm shattered. That's the longest 90 minutes of my life.

"It was on a knife edge and one goal from Poland could have made it a different story.

"But Captain Marvel (Gerrard) has taken us all the way to Brazil."

Manchester United midfielder Tom Cleverley has played a part in England's qualification campaign but missed the final games against Montenegro and Poland through injury.

He said on Twitter: "Get in there you beauty! Well in boys!"