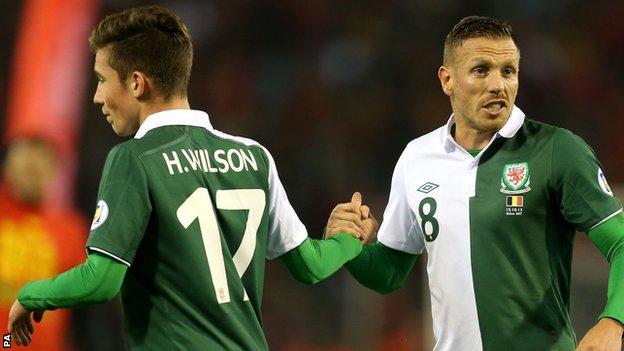 Manager Chris Coleman believes Harry Wilson, who became Wales' youngest player on Tuesday, could have another 15 years in international football.

At 16 years and 207 days, the Liverpool midfielder was 108 days younger than previous record holder Gareth Bale.

Wrexham-born Wilson's late appearance in the 1-1 draw with Belgium also ended England's potential interest in him.

"If he fulfils his potential there is another good player on our hands," said Wales boss Coleman.

"Now he has had a little taste of it, that cements his future with Wales for the next 10 or 15 years."

Who is Harry Wilson?

Reflecting on his 87th-minute introduction from the substitutes' bench, Wilson wrote on Twitter: "Great moment for me personally tonight, would like to thank everyone for the support and all the kind messages!"

Although both his parents are Welsh, Wilson - who has been on Liverpool's books since 2005 when he was eight years old - could have qualified for England through an English grandfather.

There had been speculation that England were ready to try to persuade him to switch international allegiance, but he opted for Wales.

Wilson's grandfather Peter Edwards has won £125,000 after he bet £50 on his grandson playing for Wales.

Mr Edwards was quoted odds of 2500/1 when he placed the bet with his local bookmaker in Wrexham 13 years ago.

Coleman had been well aware that Wilson's services were wanted across the border, but Wilson is now tied to Wales after appearing in a competitive full international.

"It wasn't just us wanting Harry Wilson's services. We know that," added Coleman.

"We spoke with his parents on Friday and they said he wanted to play for Wales which is great.

"He's been brilliant in training. He is full of enthusiasm and has shown some lovely touches."