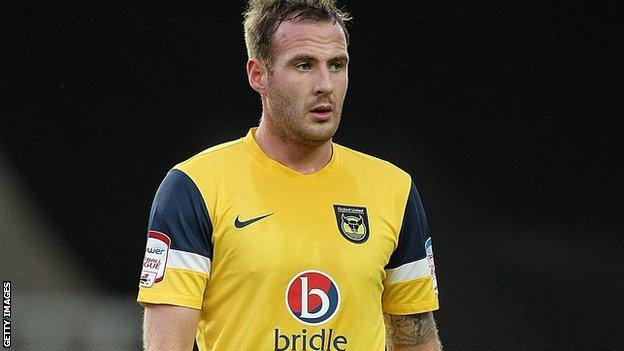 Former Oxford United midfielder Peter Leven has set his sights on managing in the Premier League after injury curtailed his professional career.

The 30-year-old Scot was released by the U's this summer because of long-term problems with his knee.

And he decided to take his Uefa coaching badges after being let go.

"There are lots of Scottish managers in the Premier League and hopefully I can manage at the top, even if I never got there in my playing career," he said.

"I need it as football is all I know," Leven told BBC Radio Oxford.

"I've started at the bottom, I'm doing my apprenticeship, I want to learn the basics and see where it takes me. I've got to provide for my daughter."

Leven started his career at Rangers and went on to have spells at Kilmarnock, Chesterfield, MK Dons before joining Oxford in July 2011.

He played 67 times for the U's, which he believes is some feat considering he was told to retire when a youngster at Rangers because of injury.

However, he does admit to thinking he could have played at a higher level had his career not been plagued by injuries.

"I was told to retire when I was 17 at Rangers but I was strong minded and I came back from that," he said.

"Every day it goes through my head, what could have been. But considering I was told to retire at 17, I did alright in the game. Sometimes you just need to listen to your body."

Leven also says he feels no bad blood with Oxford for releasing him in the summer and revealed it was a chat with owner Ian Lenagan that convinced him to pursue a career in coaching.

"It is a business at the end of the day, if they think I'm not up to playing football then who am I to argue," he said.

"I spoke to the chairman and he said I've got a good footballing brain so I'm going to go into coaching."