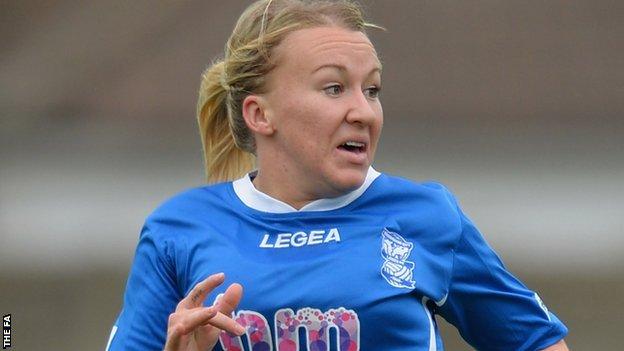 Birmingham City eased into the Women's Champions League last 16, winning 1-0 over PK-35 Vantaa and 4-0 on aggregate.

A second-half goal from Chelsea Weston confirmed the Blues' progress and set up a meeting with Zorky of Russia.

Manager David Parker said: "It was a comfortable win today despite the narrow scoreline, and a very professional performance.

"It wasn't about scoring goals, it was about getting through and we've done that in a very accomplished manner."

He added: "It will be more difficult in the next round against a good Russian team, but we'll do our homework on them and aim to make it through to the last eight."

The Blues had convincingly beaten Vantaa 3-0 in their away leg in Finland, and never looked in danger of letting their advantage slip on home soil.

They pressed from the start and after just six minutes left winger Mel Lawley went close with a 25-yard shot that struck the crossbar.

In the one moment of danger produced by the visitors, midfielder Hanne Ojanpera bounced a 15th-minute effort off the top of the bar.

But it was virtually one-way traffic, Vantaa goalkeeper denying striker Kirsty Linnett and defenders Emily Westwood and Kerys Harrop before the break.

Right-back Weston broke the deadlock five minutes into the second half, latching on to a Karen Carney pass to drive in a low 10-yard shot.

That made it 4-0 on aggregate and, although the Blues rarely threatened to increase their lead, it became a stroll into the last 16.