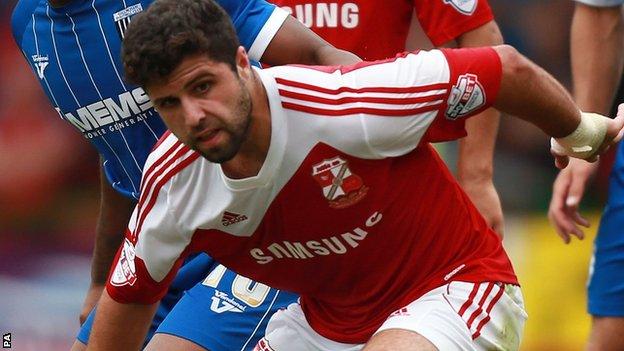 Swindon midfielder Yaser Kasim turned down the chance to play for Iraq to keep his international options open, according to Robins boss Mark Cooper.

Kasim, who was born in Baghdad and moved to London aged seven, was called up to train with Iraq for their Asian Cup game with Saudi Arabia on Tuesday.

But the 22-year-old opted to stay with Swindon to prepare for Friday's League One game against Notts County.

And Cooper told BBC Wiltshire: "I think he wants to keep his options open."

He added: "At this time in the season, and his career, [making the decision] is not the right thing for him to do."

Ex-Tottenham and Brighton youngster Kasim has been ever-present for Swindon in the league this season and signed an extended contract earlier this month.

His decision not to make the midweek trip to Jordan means Cooper will have him available for the visit of the Magpies.

The Town boss says he wants his side to match the performance of Saturday's 4-0 away win at Rotherham.

"We have to make sure we keep fighting," said Cooper.

"The biggest thing I took from the game on Saturday was the fight we showed to repel everything Rotherham threw at us.

"It was one question mark I had in my mind and in one game the players have answered it.

"If we can stay in games long enough I think we have the players to hurt other teams."