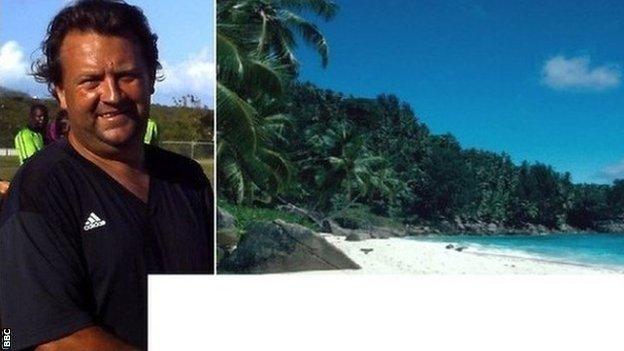 Waking up on an island of crystal blue lakes, turquoise seas and tropical temperatures each morning sounds like paradise.

But rather than relaxing in a hammock all day in his adopted home of the Turks and Caicos Islands, 41-year-old Englishman Matthew Green is busy trying to rid the country of the title 'world's worst football team'.

It's a distinction they share with Bhutan and San Marino at joint 207th place in the Fifa world football rankings.

The task isn't easy, as Green's team last won in 2008 (against St Lucia) and haven't actually played a match for two years because of a shortage of players. His squad includes a variety of occupations, including a policeman, lawyer, teacher and construction worker.

Add the fact that his only other managerial experience is with a pub team in Hull and you get an idea of how tough his job is.

"Everybody thinks you are sat on the beach drinking pina coladas," Green says. "I wish I was, but there is too much to do.

"I did once take a pub side in Hull, called Spiders, to a Sunday League title. But that was a bit different to running an international team.

"Every time I go back to Hull, my brother and friends make fun of the fact we are ranked so low. I know they are only joking but there is pride there. You want to see your country rise up the rankings.

"We are certainly capable of doing so, if we can get some extra resources."

The Turks and Caicos Islands is a British territory made up of 40 Caribbean islands - eight are inhabited - covering an area of 166 square miles. The overall population is about 30,000, one third of whom are under 15.

As technical director of their football association, Green is responsible for overseeing all aspects of football development, from working with the men's and women's national teams to the youth set-up, coaching and refereeing.

The island's league has six amateur teams, yet most of the players are expats meaning Green has a pool of fewer than 25 players to choose from.

There are some talented youngsters, but they tend to be on scholarships in America and the UK, making it difficult to return for matches or training camps.

One of the few professionals available is Gavin Glinton, 34, who plays for Vietnamese second division club Mikado Nam Dinhis. He is the country's all-time top goalscorer, with four goals in eight international matches.

"The players are great to deal with, for the most part," says Green, one of three full-time football employees.

The island's FA was formed in 1996 and became affiliated to Fifa two years later. Back then they had no pitches, no leagues, and had to wait until 2006 for their first win - against the Cayman Islands in the Caribbean Cup.

So how did a former teacher from Hull become their manager?

Green was released by Hull City at the age of 15 for being too small and went on to qualify as a teacher. He arrived in the Bahamas in 1998 trying to find a job at a school.

The search was fruitful and he turned Temple Christian High School into one of the major powerhouses of Bahamian football, with the senior high girls team winning the national championship every year from 2001 to 2007. At the same time he also started to work his way up the national coaching ladder.

He was also an active player, finishing top scorer for Grasshoppers FC in 2000 and 2001.

In 2007, he spotted an advert for technical director of the Turks and Caicos Islands FA and decided to give it a go.

He landed the job and discovered an island of beautiful beaches and average summer temperatures of 29C. It's little surprise that celebrities such as Hollywood actor Bruce Willis and England defender Rio Ferdinand have splashed out on properties there in recent years.

Green lives on his own in a two-bedroom house surrounded by natural vegetation, overlooking lakes and hills. A balcony provides picture-perfect views.

After 15 years in the Caribbean he feels at home, although traces of his heritage are revealed from time to time.

"My accent varies depending on who I am talking to," he says. "I have a 'coaching voice' which is a bit of a 'put on', but it makes sure all our players can understand me.

"My Hull accent comes out when I get angry or excited - which is quite often!"

The islands haven't played since their 10-0 aggregate defeat to the Bahamas in a World Cup qualifier in 2011.

Green is determined to hold a couple of friendlies in the coming months, ahead of their 2018 World Cup qualifying campaign in the Concacaf group. And he's sure there are reasons for optimism.

"Within a few years we have managed to put together a pretty strong youth programme and our grassroots programme is pretty big," he says. "We now have over 20 leagues and competitions across all ages and sexes. A few years ago we had three.

"It has not been easy, but it has become the most popular sport in the country at youth level. Track and field, softball and basketball are still very popular but, in terms of numbers, football is well ahead now.

"A new stadium was built the other year, while we now have more than 500 youngsters registered to our youth programmes compared to less than 100 when I first started."

Maybe he can even get the islands off the dreaded bottom spot in the rankings, which really would be reason for celebration.