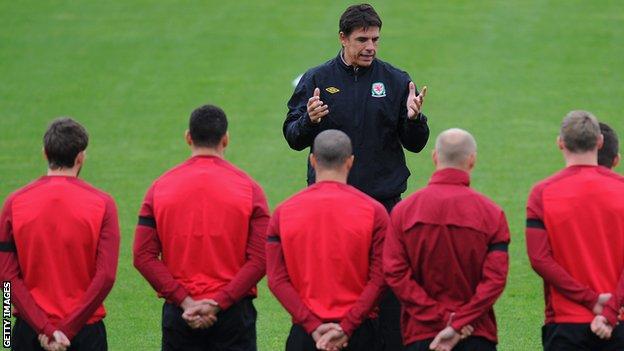 So yet again we've failed to qualify for a major tournament, though realistically we were always fighting for third place in a group which included Belgium and Croatia.

We eventually finished fifth in Group A, which is disappointing - but, like many other Welsh fans, I am frustrated more than anything.

We finished the campaign strongly, beating Macedonia in Cardiff last Friday, and then securing a fantastic point in Brussels against the team who were by far the best in the group.

These two games have highlighted the problems Chris Coleman has endured over the past 18 months as Wales manager.

Going into our last two matches, he was without 11 players and so had to call upon the likes of Owain Tudur Jones, David Cotterill, Jazz Richards, Jermaine Easter, James Wilson and Liverpool teenager Harry Wilson to fill the gaps left by Gareth Bale, Ben Davies, Joe Allen, Johnny Williams and skipper Ashley Williams.

To qualify for a major tournament, we need all our best players fit for every game. This just has not happened for Coleman and I sympathise with him.

But even amid all the uncertainty, I believe Chris Coleman is the man to lead Wales into the qualification campaign for the 2016 European Championships in France.

A few weeks ago, the Football Association of Wales chief executive Jonathan Ford implied the last two qualifiers were key to Coleman's future.

Well, if Coleman was on trial the evidence for the defence was compelling, with the victory over Macedonia and then spoiling Belgium's World Cup party.

He has made mistakes you would not expect from an international manager. I am thinking of the passport issue and the fact James Collins had to make the first move to return to the fold.

Some of his tactical decisions have been questionable, such as playing central striker Simon Church out of position in wide areas.

But, as I have said previously in this column, the players are fully committed to him - and as manager you cannot ask for more.

It is now time for both parties to end the uncertainty and give Coleman the reins for the next tournament.

On the pitch in Brussels, faced with a star-studded Belgium team, we continued where we left off against Macedonia.

The Welsh boys worked hard, showed pride and passion in their performance and got their reward when Aaron Ramsey fired the ball through the Belgium keeper's legs with two minutes remaining.

Ramsey again shone, but he was not the only one to give a sterling performance.

Chris Gunter and James Collins were outstanding in the heart of our defence and Jazz Richards grew into the game after a difficult first half against Kevin Mirallas and Kevin de Bruyne.

Big Wayne Hennessey was back to his best, making some top-class saves to keep us in the game after de Bruyne had fired the home side ahead midway through the second half, just as Collins had left the field through injury.

To be fair, the Welsh lads's heads did not drop and they showed plenty of character to stay in the game.

Indeed, we were hard done by when Daniel van Buyten barged into Church in the penalty box and nothing was given. I am sure had Collins barged into Romelu Lukaku in our penalty area the referee would have been pointing to the spot.

With time running out, Coleman decided to give Liverpool academy player Wilson his senior debut and the 16-year-old became the youngest player to represent Wales, breaking Bale's record.

However, he did not have too many opportunities to show the faithful travelling Wales fans his capabilities.

Instead, it was left to the man playing his last game for Wales to create the chance we needed for Ramsey to net the equaliser.

This game was a fitting end to a fantastic Wales career for Craig Bellamy. A brilliant atmosphere in a full stadium against one of the best international sides in Europe - if not the world - is how Bellamy deserved to bring the curtain down.

As always, he was determined to make a mark on proceedings - and didn't he do just that?

In the 88th minute, he collected the ball on the left-hand side of the Belgium penalty area and instead of trying to beat his man, slipped a perfect pass into the path of Ramsey to fire home.

Bellamy has been a fantastic servant for Welsh football and he is going to be a very hard act to follow. He will go down as one of our greatest players.

So, looking back, we were disappointing against Serbia, brilliant against the Scots, unlucky to lose at home to Croatia and really should have beaten Macedonia in both matches.

We lost to Belgium at home when we were down to 10 men and we have taken a point from them on their own patch.

It is not all doom and gloom. We have some very talented players, a couple of gems, and in the last two games we have shown we have strength in depth, something we were not sure we had.

We need a little bit of luck and we need all our best players to be fit for nearly every game.

If we get these elements, and show the same desire and passion we've shown in the last couple of games, then I'm convinced we will not be too far from qualifying for the 2016 European Championships.