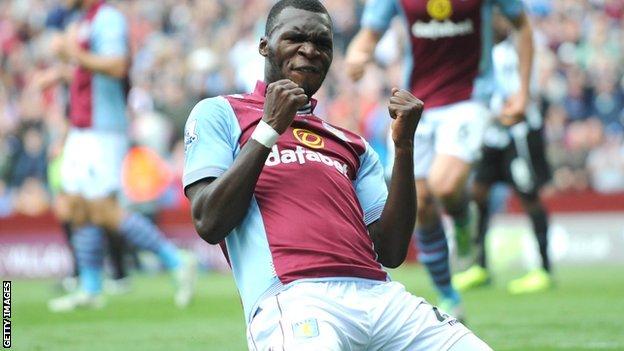 The Belgium international was ruled out for four to six weeks after suffering a hip injury in Villa's win at Norwich on 21 September.

But, after training with his national side this week, Benteke was an unused substitute against Wales on Tuesday.

Since joining Villa from Belgian side Genk in August 2012, Benteke has scored 23 goals in 39 Premier League appearances

"He must have been fit enough to go on the bench, or they wouldn't have done that," boss Paul Lambert told BBC WM.

"He's been in dialogue with our medical people. He's doing well and felt good.

"He was training Sunday and Monday with the national team. We trust Christian to come back and then see how he feels and judge from there."

Benteke, 22, is Villa's leading scorer this season with five goals.

Villa are unbeaten in the last three Premier League matches, and have picked up four points from two games without Benteke.