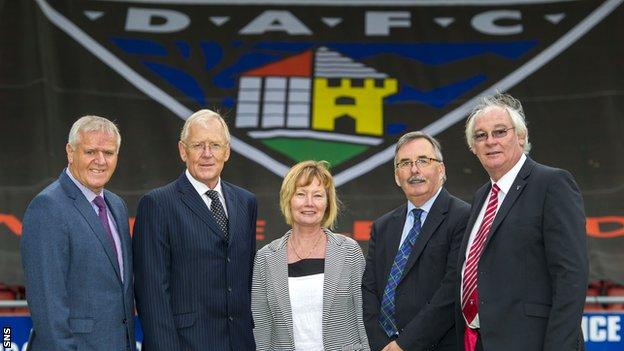 Pars United has announced it has taken control of Dunfermline after completing the acquisition of the club from administrator BDO.

The new owner intends to "proceed towards coming out of administration" at the Court of Session in due course.

The club were subsequently deducted 15 points and were eventually relegated to Scotland's third tier via last season's play-offs.

but the prospective owner recently revealed that to survive the season.

And last week a threatened to hinder Dunfermline's exit from administration.

However, designed to prevent the club's lease with their Fife Council ceasing, with the former banker later saying he had wanted to improve the multi-sports facility at Pitreavie.

The company in control of East End Park had also entered administration and acquiring both the club and stadium had always been Pars United's aim.

In a statement, the group said: "Following the hearing at the Court of Session relating to the lease at Pitreavie, Pars United has held detailed discussions with our legal representatives.

"In the short timeframe it was not possible to achieve our initial objective of renouncing the lease with Fife Council.

"However, DAFC will continue with this lease in the short term and engage with all interested parties, including Fife Council, to arrive at a satisfactory outcome for the long-term benefit of DAFC."

Pars United's Bob Garmory has been appointed the club's new chairman and will be joined on the interim board by Leishman, Ian Hunter, Kip McBay, Craig McWhirter and Margaret Ross.

General manager duties will be shared by Ross McArthur and David McMorrine.

"The last few months have been a painful and frustrating time for everyone connected with Dunfermline Athletic," said Garmory.

"However, we ask that all Pars supporters and the wider West Fife community now look forward, not back, with a renewed sense of optimism and spirit.

"As previously stated, the Pars fans have already shown their resolve and support for saving the club and that now needs to continue going forward.

"We cannot lose the positive attitude and sense of involvement and engagement amongst our core support.

"The fundraising effort of the Pars supporters and patrons has been nothing short of exceptional, particularly in such tough economic times.

"They really have been like an '12th man' over the last few months."

BDO business restructuring partner Bryan Jackson expressed his delight that the "historic club" was in the process of being saved.

"When I was appointed administrator of DAFC in late March, I said it was a considerable task to save the club and, given the events of recent weeks, I wasn't wrong," he said.

"But it was the devotion and loyalty of the fans, the team, the staff, management and, of course, Pars United which helped get this over the line.

"Given that this has been completed in just over six months, which is pretty quick for a CVA, I would like to congratulate the team at Pars United for their efforts."

Dunfermline, under the management of Jim Jefferies, resume their Scottish League One campaign on Saturday against East Fife and currently sit third in the table.