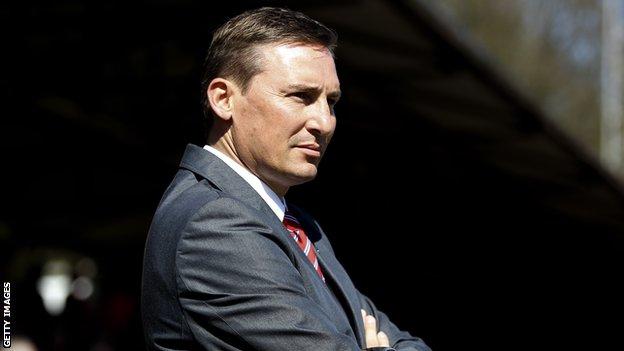 Aldershot Town manager Andy Scott and his assistant Terry Bullivant have extended their contracts with the Conference Premier club.

The pair, who joined Shots in February, will now remain at the Electrical Services Stadium until 2016.

Chairman Shahid Azeem said: "The board of directors are thrilled they have signed these three-year contracts.

"We were very keen to keep them both for the long-term. We enjoy working with them and know we can trust them."

After joining the Hampshire club last season, Scott was unable to save them from relegation from the Football League.

It was probably the most difficult summer that anyone can have, but it was also a great opportunity for me to change the whole ethos of the playing staff

Aldershot began this season on minus-10 points following a spell in administration over the summer, but Scott and Bullivant have guided them to six wins and four draws from their first 15 league games of the new campaign.

"The club's problems over the summer have been well documented, but Andy and Terry were so committed to our vision for the football club that they wanted to stay despite the sacrifices they had to make," Azeem added.

"They have always been open and honest with us, and we wanted to reward them for their loyalty."

Scott, who has previously managed Brentford and Rotherham, is now focused on guiding the side out of the bottom four and further up the table.

"It was probably the most difficult summer that anyone can have, but it was also a great opportunity for me to change the whole ethos of the playing staff at the club," the 41-year-old said.

"I've learnt a lot in the last few years of management, both from doing well and when you get the sack.

"You live and learn. This season has proved to be successful so far and I will hopefully continue to learn."