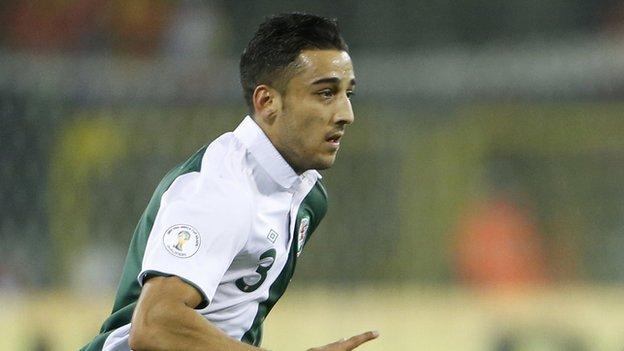 Wales ended their World Cup qualifying campaign on a high with a win over Macedonia and a draw in Belgium.

And Taylor told BBC Radio Wales: "We've always said we wanted him to stay. We want stability, he has the right ideas and knows what he's talking about."

Coleman's contract ends after next month's game with Finland and he has said he is undecided over his future.

Taylor added that he had sympathy for the problems Coleman has encountered in his time in charge of the national side, since succeeding the late Gary Speed in January 2012.

"It's got to be difficult for him when he gets half a squad, or not even half a squad like this time," Taylor added.

"But it shows what he got out of us is what he's capable of and we want to build on that for him.

"Hopefully when we get all the players back, what we can produce should be great."

Taylor also paid tribute to Cardiff forward Craig Bellamy, who made his final international appearance in Brussels before retiring from the international game.

Bellamy is Wales' third most-capped player, having made 78 appearances for his country and fifth on the all-time scorers' chart with 19 goals.

"It's been a privilege to play with him and I'm a little bit gutted that he's retiring to be honest, but I think the body tells you sometimes that you need to," Taylor said.

"He's a massive loss to Wales but what a shift. I mean this guy has turned up for every friendly, not just the ones that matter.

Taylor is sure that Wales can build on their promising end to the campaign ahead of the Euro 2016 qualifying campaign, which will start in September 2014.

"We have got to make sure this time that it does bode well for the future and that we do well in the future," Taylor added.

"We can't turn it on and off and the manager next time will want all his players fit.

"If we can play like that with our best players as well, then we look a different team."