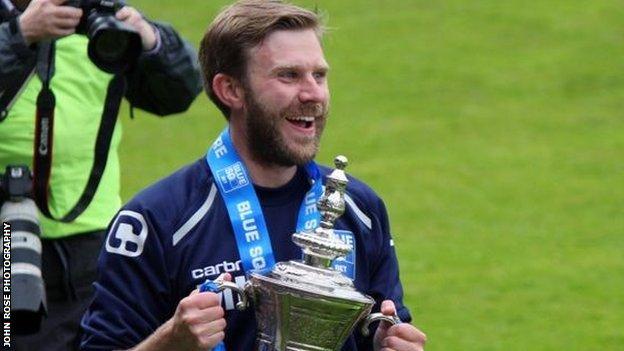 Manager Mikey Harris says Salisbury will not get carried away with their impressive start to life in the Conference Premier.

Harris took charge in the summer, following Clarke's departure to Bristol Rovers, and has led them up to fourth with eight wins in 15 games.

"We've got a very long way to go," the 29-year-old told BBC Wiltshire.

"I'm pleased with our form. Our record is excellent, but as I say to the lads unless you follow it up with more great form, it becomes irrelevant.

"We're certainly not getting carried away. Each game is a project and we need to keep working that way, as it's served us well.

"The key is getting consistency over the season."

Clarke and Harris were part of the squad when cash-strapped Salisbury were demoted two divisions to the Southern Premier in 2010, after failing to meet payment deadlines.

Both stayed on to take charge of first-team affairs and together they brought the club back to the top tier of non-league, beating Dover in the play-offs in May.

Clarke moved on to become assistant to Rovers boss John Ward, and Harris took charge of the first team.

Aged 28, he became English football's youngest full-time manager and some Salisbury fans questioned his credentials because of his age and inexperience.

His tenure got off to a shaky start with three straight defeats but they have lost only one game since then and are in the play-off zone.

"Maybe we are surprising a few clubs," said Harris. "But I wouldn't say it's surprised me because we've got a very good group of lads.

"I'm just of the firm belief if you work harder than anyone else then you give yourself a good chance of being successful.

"But at the moment we've achieved nothing. We've got ourselves in to a good position after 15 games but that's all it is.

"Everything can change so quickly. A couple of losses and a couple of wins for someone else it all changes. If we are there at the end of the season then that's a different matter."