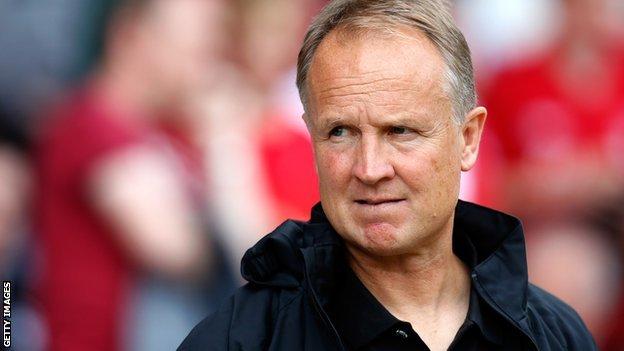 O'Driscoll took charge at Ashton Gate in January, with the club bottom of the Championship, and he was unable to save them from relegation.

He overhauled the squad in the summer but they have struggled to find form in League One this season and are without a win so far.

"Will there be some patience required? Yes," Lansdown told BBC Radio Bristol.

"It does take a while to get a team to play how he wants to play. We may well be in that initial phase now."

O'Driscoll started his management career at Bournemouth before leaving to join Doncaster in September 2006.

It took eight games for him to secure his first win as Rovers boss but the following season led them to promotion to the Championship.

Lansdown continued: "Sean's got a track record of being successful. People remember him being promoted with Doncaster [in 2008] but forget they went through a bit of pain at the start.

"There will be pressure because people always look at results, but there's nothing to suggest that he can't achieve the same success here as he has done elsewhere."

The 56-year-old was intent on bringing a new sustainable plan to the club who, in previous years, relied heavily on investment from majority shareholder, Lansdown's billionaire father, Stephen.

Many of the club's highest earners were released or sold in the summer and O'Driscoll is now focused on utilising their youth system within the first team.

And, despite their 19-game winless run, which dates back to 9 March, Lansdown insists their plan to run a financially-sustainable club, focused on youth and local talent, will remain in place.

"You can't say it's not a concern when you're sat second from bottom. The results speak for themselves," he added.

"But the strategy won't change. It would be pointless to set it then change it. It's easy to bring in players but harder to bring in the right players.

"Nothing we do in the short term will go against that."