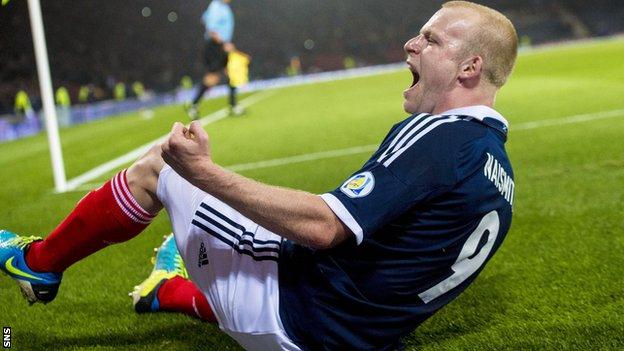 Steven Naismith says the Scotland squad is as confident as he has ever known it, despite finishing fourth in their 2014 World Cup qualifying group.

The Everton forward scored against Croatia as Gordon Strachan's side ended their campaign on a high.

"Since I've made my international debut this is the most confident I think the squad have been," Naismith told BBC Radio Scotland.

"We really believe that we can go into this next campaign and challenge."

The draw for the Euro 2016 qualifying groups takes place in February.

For the first time, the European Championship finals will be a 24-team tournament instead of the 16-team format used since 1996.

We've shown a lot of potential now and it's time to fulfil that.

Naismith, 27, made his international debut as a late substitute against the Faroe Islands in 2007, but his hopes of adding a second cap were hampered by injury until he started in a match versus Holland in 2009.

He picked up his 25th cap against Croatia on Tuesday and wants to take the positivity from that result into Euro 2016 qualifying.

"That's when the real test comes, in the next campaign," said Naismith on BBC Radio Scotland's Sportsound programme.

"We've shown a lot of potential now and it's time to fulfil that. Hopefully in the next campaign we can start well, push on and get where we feel we belong - at the major tournaments.

"We've got midfielders, especially, that are real, real quality. Players that can see the passes that cut teams up.

"When we go forward we've not only got good players, we've got great athletes who can last 90 minutes."

One player Naismith has been delighted to have around the Scotland set-up is Watford's Ikechi Anya, who won his third cap against Croatia.

"Off the pitch he's a great, chirpy guy who's full of confidence and a good personality," added the former Rangers and Kilmarnock player.

"He's shown in the games he's played in, he's a livewire. He's probably the one who can take a defender on like he did in getting us the penalty."