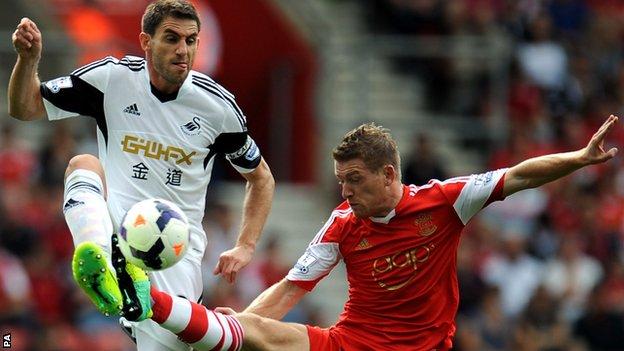 Swansea defender Angel Rangel has said his side must be aware of the effect that having a new manager will have on Saturday's opponents Sunderland.

Gus Poyet was appointed as the Black Cats' new boss last week and the trip to the Liberty Stadium will be his first game in charge of the bottom-placed team.

"When you get a new manager in a situation like this all the players are going to give probably an extra 100 per cent," he told BBC Wales' Sport Wales.

"They need to prove themselves to him."

However the Swans right-back says the visitors will not face a comfortable afternoon.

"Swansea is not an easy place to come and hopefully we can play our own game and win it," he said.

"We know that at home we haven't won a game for a while so we have to start, because in the Premier League I think the most important thing is the home form and we have to start against Sunderland.

"I have seen a few of their games, especially the last one against Manchester United. You can see the players are fighting for their lives and are giving everything they can.

"But when you are in that situation at the bottom of the table, because of the pressure you are under, you are not playing with your best qualities and they have been a bit unfortunate.

"So I think we are going to have to try to take advantage of that and try to beat them."

Swansea are currently 15th in the Premier League table with seven points - which puts them level with the three teams immediately below them including Norwich, who are in the relegation zone.

However Rangel is not worried about the side's form so far this season.

"I know it looks like not the best of starts but we are realistic. We know that we had a very difficult start against top teams like Manchester United, Tottenham, Arsenal and Liverpool so obviously that shows you it is difficult to get points against these teams.

"But we got a draw against Liverpool and then we beat the teams that we really needed to beat which is Crystal Palace and West Brom.

"These are the teams in the same league as us so now we've got a great chance to beat Sunderland and West Ham at home and I think they are two massive games for us."

Both defenders missed Wales's World Cup qualifiers against Macedonia and Belgium because of hamstring and ankle injuries respectively.