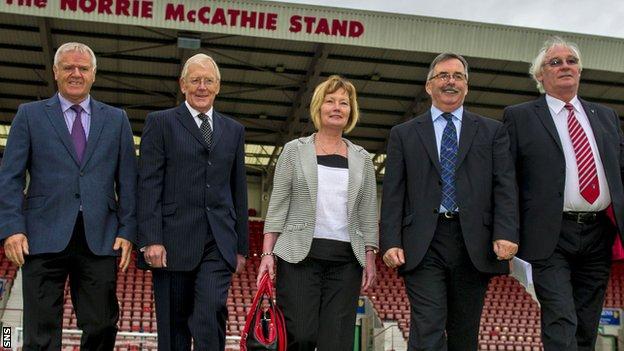 Pars United is a victory as big as any in their history, according to club legend Jim Leishman.

The former Pars central defender led the Fifers to successive promotions and back to the top flight as manager.

"It is a huge step in Dunfermline Athletic's future," Leishman said as the community group took control from administrator BDO.

"We've got out of that situation and we're going to drive it forward."

A winding-up order over unpaid tax of £134,000 forced Dunfermline into administration earlier this year.

And Leishman, who is on the new interim board, admitted that the club had been

"It was very close," he told BBC Scotland. "Two or three times we thought 'what way can we turn now?', but everyone had individual strengths and everyone came up with ideas.

"The legal team was great and the whole Pars United board were together on the end result and that was buying the Pars and giving them a future."

Pars United have also acquired the stadium, East End Park, from a separate administrator, KPMG, and will now move to take the club out of administration.

"Everyone's on a high just now, but reality will kick in very shortly," said Leishman.

"The journey's not complete. We've got to get sustainability at the club.

"The fans up until now have been doing tremendous things. They've raised a lot of money and there's groups of fans still out there trying to raise more funds, which is terrific.

"That is what Dunfermline Athletic is all about - about the community - but we need everyone to combine their strengths now, the business community to come back on board to help out and we've got a lot of fans that are businessmen throughout the world that I'm sure are going to give us a hand."

Leishman grew up as a Dunfermline fan and recalled their glory days, when they won the Scottish Cup twice during the 1960s and reached the semi-finals of the European Cup-Winners' Cup.

However, they are now back in the third tier of Scottish football after last season's deduction of points for going into administration followed by defeat in a play-off that led to a second successive relegation.

"I would have never believed in the late 60s/early 70s that Dunfermline would be having the problems they have had over the last six months," added Leishman.