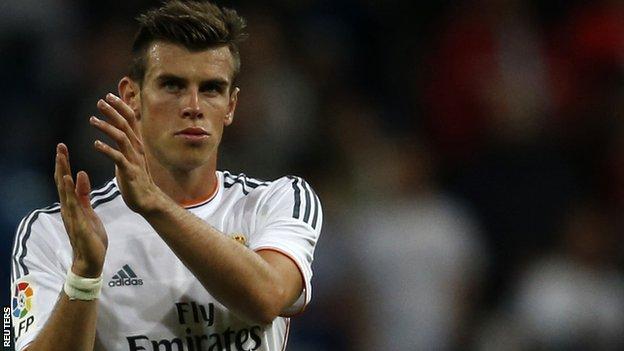 Real Madrid's world-record signing Gareth Bale will play a part in Saturday's La Liga clash at Malaga after recovering from a thigh injury.

Bale, a £85.3m summer recruit from Tottenham, missed Wales's final World Cup qualifier in Belgium on Tuesday and has played only three times for Real.

But the 24-year-old forward trained with Carlo Ancelotti's squad this week.

"I want to give him minutes because he needs to play and to know how to play with the team," said the Italian.

The Spanish club recently denied a report published by Marca newspaper that claimed Bale has suffered a slipped disc in his back.

Ancelotti insists the Welshman is simply struggling for match fitness after he missed Spurs's entire pre-season campaign while his move to the Bernabeu was completed.

"He doesn't have a back problem, his problem was the lack of a pre-season," added Ancelotti.

"If you look at his last four years he has played more than 120 games.

"He is working very well every day, now he is in much better condition and he is ready to play."

Real are third after taking 19 points from their opening eight matches, five drift of Barcelona and Atletico Madrid who have both made 100% winning starts.

Atletico have striker David Villa available after he missed Spain's recent World Cup qualifiers because of an ankle problem.