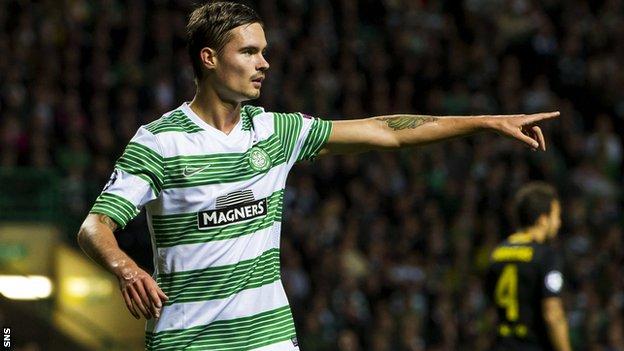 The Swede picked up a knock on international duty and may miss Saturday's trip to Hibernian.

"He [Lustig] is a serious doubt for the weekend so we'll have to re-think things a little bit," said Lennon.

"We need to nurse him because he does have hip problems, groin problems and we do manage him during the week.

"[Efe] Ambrose has played international football at right-back so he's a possibility, we've got Darnell Fisher, or I may change the formation."

Celtic host Ajax next week before travelling to Amsterdam for the return fixture on 6 November.

Having lost their opening two Group H fixtures and , Celtic trail Ajax by a point ahead of the double-header.

"Ajax is huge in terms of the group and where we want to be in the group," Lennon said.

"I wouldn't say it's a must-win game but it's a game that we would dearly love to win just to get us up and running in the group.

"We mustn't lose. I don't like making predictions. If we can get four points out of the next two games it would set us up very nicely indeed, but it's a big ask.

"We've done our own homework. I've watched them live against PSV, we're hoping to go out again and watch them again against Twente and then that will give us a real idea of where we are and what we need to do."

"[Derk] Boerrigter will still be maybe a week or so [before returning from injury]. He's doubtftul for Ajax and obviously [Steven] Mouyokolo is still long-term [injured]."