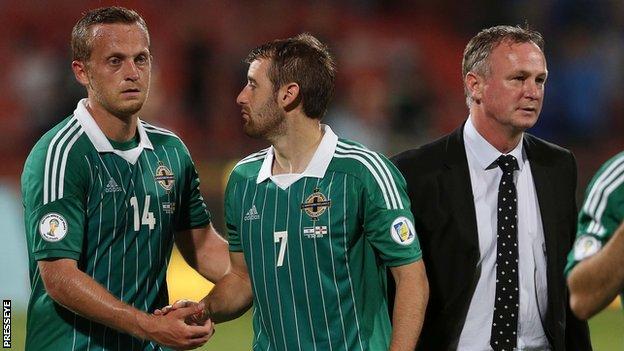 Northern Ireland have dropped four places and the Republic of Ireland one in the latest Fifa world rankings list.

Northern Ireland fall to 90th position, two places behind Azerbaijan, to whom they lost 2-0 in a World Cup qualifier in Baku last week.

The Republic are now 60th, well behind 10th-placed England, Scotland, who are 35th, and Wales, who lie 44th.

Spain remain the world's highest ranked team, followed by Germany and Argentina, with Brazil back in 11th.

Northern Ireland's ranking has continued to fall in recent months following their defeats away to Luxembourg, who are 127th, and Azerbaijan, who move up 19 places.

Michael O'Neill's side finished in a lowly fifth position in Group F but restored some pride with Tuesday's 1-1 draw against Israel in Tel Aviv.

The Republic's 3-1 victory over Kazakhstan confirmed them in fourth position in Group C.