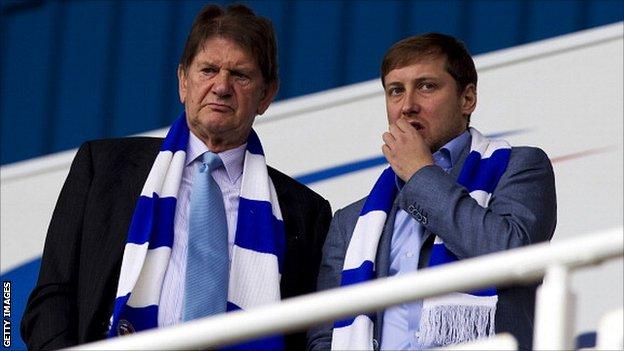 Reading chairman Sir John Madejski says he is comfortable with the delay to the full takeover of the club.

Russian Anton Zingarevich was due to buy the remaining 49% of the club held by Madejski by the end of September.

That deadline passed and Madejski, who has been asked to stay on as chairman for two more years, says no date has been discussed to complete the deal.

"There is is no rush, he owns 51% and I own 49% and am a junior shareholder," Madejski told BBC Radio Berkshire.

Madejski owned Reading for 22 years before agreeing to sell a controlling interest to Thames Sports Investment, led by Zingarevich, in January 2012.

The deal to acquire the 51% stake, thought to be worth about £40m, with a bonus to Madejski for promotion to the Premier League, was expected to be completed in March but was delayed by three months.

The deal for acquiring the remaining 49% is believed to be worth £25m.

"We haven't discussed a date, everyone is focussed on the club," said Madejski. "We have a great team and great manager and I am concentrating on the job at hand."

Promotion to the top flight in 2012 earned the Royals an estimated £90m, with half that money coming from television-related revenue.

However, the club were relatively frugal when strengthening the squad for the Premier League.

In total, they spent less than £10m in attempting to cement their status, with the £2.4m purchase of Adrian Mariappa from Watford their biggest outlay.

Relegation last season meant the club missed out on the new £5bn global television deal, which would have earned them upwards of £100m, but Reading will still receive in excess of £60m over a four-year period in parachute payments.

The club have also spent little this summer, bringing in Royston Drenthe, Wayne Bridge and Danny Williams, while receiving more than £4m for the sales of Mariappa and Jimmy Kebe to Crystal Palace.

Reading fan's group STAR have called for clarity regarding the takeover saying they fear the club could go the same way as Portsmouth - who suffered years of financial misery at the hands of previous owners.

But Madejski has urged fans not to worry.

"There is no reason for that type of concern," he said. "Onwards and upwards as far as I am concerned. I will always do my best for Reading Football Club."