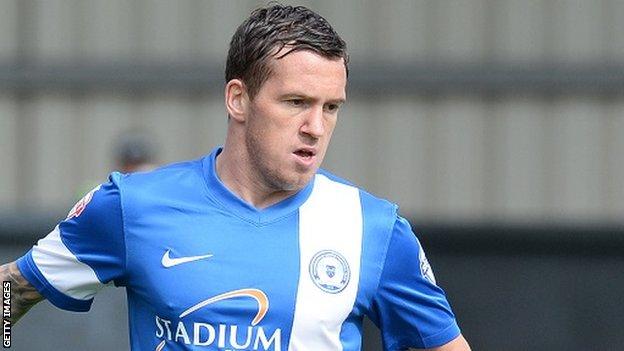 Peterborough United midfielder Danny Swanson believes his longest run of starts since joining the club is bringing out his best form.

Swanson, 26, has started the last eight games as Darren Ferguson's side continue to maintain their position among League One promotion favourites.

Swanson told BBC Radio Cambridgeshire: "The gaffer says once you get a run of games you'll get better with every one.

"I feel that's happening because I feel as fit as I've felt for a few years."

I think teams are a little bit scared coming to London Road and we take a boost from that, but we need to take it into away form as well

Peterborough go into Saturday's home game against Shrewsbury second in League One, having won nine and drawn one of their 11 league games this season.

And Swanson, who was primarily used off the bench by Ferguson last season, has begun to justify the promise he showed at Dundee United, where he was called up by his country before missing out on a possible first international cap due to injury.

"I probably dipped in form against Rotherham but I think I've picked it back up again and I feel quite an important part of the team," said Swanson.

"Last season was difficult. I've always felt welcome since coming here, but if you're not playing you're not happy. It's not that you want to leave or anything, you just want to play - it's hard training all week and not playing on a Saturday."

Swanson acknowledges he has had to curb his attacking instincts as part of Ferguson's preferred midfield diamond.

"I've had it drummed into me since I turned full-time a few years ago, defending better, and I've always worked on it, but I used to get caught out of position sometimes. Now I feel more defensively minded," he said.

Peterborough have conceded just eight goals in their 11 games.

"I think teams are a little bit scared coming to London Road and we take a boost from that, but we need to take it into away form as well," said Swanson.

"It is tight at the top, it's always going to be at the start of the season, but all you do is think about the next game, as the manager tells us."