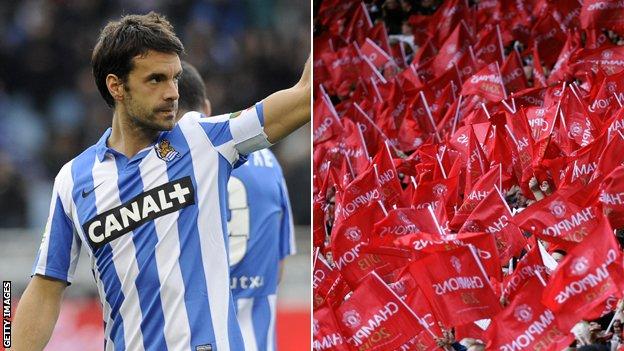 When Real Sociedad raced into the Champions League by finishing fourth in last season's La Liga and hammering Lyon 4-0 over two legs in August's final qualifying round, long-serving skipper Xabi Prieto had only one wish: to be drawn in the same group as Manchester United.

The 30-year-old playmaking midfielder told BBC Sport: "Ever since I was small, I have always really liked Manchester United.

"I used to have an Eric Cantona shirt - he was my favourite player. They are a mythical club, one of the biggest in the world, and the stadium has always really attracted me as well."

Prieto got his wish, of course, with La Real placed alongside United, Shakhtar Donetsk and Bayer Leverkusen in a tough-looking Group A.

However, his dreams are now in danger of turning sour. Sociedad have endured a disappointing start to their La Liga campaign, winning just twice in their opening nine games.

The San Sebastian-based club have also suffered in the Champions League, losing their opening two group fixtures with a 2-0 home defeat against Ukrainian champions Shakhtar followed by a last-minute 2-1 loss at Leverkusen.

And on a personal level, Prieto's long-held ambition of playing at Old Trafford was placed in jeopardy when he sustained a thigh injury in last month's 4-1 league defeat at Barcelona. He returned to action with a brief substitute appearance in Saturday's much-needed 2-1 victory over Valencia, boosting his chances of returning to the starting line-up for Wednesday's game in Manchester.

Whether he starts or has to settle for a place on the bench, Prieto is determined, however, to ensure nothing detracts from his team's opportunity to appear on one of the most famous stages in world football, and Sociedad fans certainly share their captain's excitement - their allocation of nearly 6,000 tickets for the game quickly sold out.

"The players, fans and everyone in San Sebastian were all very excited to be drawn against Manchester United," Prieto confirmed. "It will be a beautiful thing to play against them.

"Lots of people are travelling to help the team and enjoy the night, and a victory for La Real would be a magical occasion for us. It will be difficult against such a good team, but we have to dream and believe it's possible."

The Basque club's insistence on enjoying their Champions League campaign - whatever happens on the pitch - has been intensified by the fact they have not appeared on the European stage since 2003-04.

"We've had so many years without playing in Europe, including three seasons in the Segunda Division, and we have to make sure we enjoy these times now," said Prieto.

"We just have to do our best. We know that La Liga is our most important competition, and in the Champions League we want to enjoy it, be competitive and try to get into the knockout stage."

Sociedad's sudden rise into European football's elite came as a major surprise after a recent history of mid-table mediocrity. Indeed, this time last year they appeared to be on course for a dreary struggle against relegation before embarking upon an astonishing run of just two defeats from their final 28 games to secure an unlikely fourth-place finish.

Throughout that magnificent six-month spell, La Real were particularly notable for their free-scoring style - especially at their home stadium, the Anoeta. They scored no less than 20 goals in their final six home games of the season, allowing exciting attacking trio Imanol Agirretxe, Antoine Griezmann and Carlos Vela to all reach double figures for the campaign.

Reflecting on his team's superb run of form, which included a 3-2 victory over Barcelona and a 3-3 draw with Real Madrid, Prieto is unable to identify one key ingredient for their success. "It was a bit of everything," he said. "We had a great team spirit, and when we started to get some results it gave us confidence."

"But the most important thing was that we had a team full of good players with a lot of quality. We played together and everyone had a role. It was a combination of confidence and talent."

The summer saw the departures of manager Philippe Montanier to Rennes and young midfield star Asier Illarramendi to Real Madrid, but the club's ambitions remained high - and hopes were further raised by impressively dominant performances to secure a pair of 2-0 victories over Lyon in the Champions League play-off.

But they suffered a worrying dip in form after the end of August, going seven league games without a victory, before finally getting back to winning ways at Valencia at the weekend.

Prieto accepts his team has struggled to balance their ongoing league commitments with their desire to impress on the European stage, with their form suffering on both fronts.

"We're not accustomed to playing twice a week and it has been a lot of games for us," he admitted. "But the players will get used to it and we've also suffered some untimely injuries. When we get all our players back it will help the team and I believe we can still have a great season."

Those injuries have certainly been a factor. Whereas last season they were able to field a remarkably settled side, with eight players starting at least 30 league games, the current campaign has seen a number of players miss significant chunks of action - most notably on-loan QPR man Esteban Granero, who was signed to replace Illarramendi but will miss the majority of the season with a serious knee ligament injury.

However, it wasn't long ago that La Real were taking on and beating any opposition put in front of them, and they certainly remain potentially dangerous opponents for Manchester United if they can rediscover some of last season's magic.

And Prieto, if he recovers from his thigh injury, should be well prepared for the occasion after receiving some insider tips on exactly what it's like to play at Old Trafford - Xabi Alonso started his career alongside Prieto in Sociedad's midfield before joining Liverpool, and the pair are still good friends.

Real Sociedad's success last season was achieved with an extremely attack-minded approach, and it will be fascinating to see whether new coach Jagoba Arrasate is bold enough to maintain his team's positive strategy at Old Trafford on Wednesday night.

Prieto, who was born in San Sebastian and has only played for Sociedad, insisted his team are able to adapt their tactics according to the situation, saying: "We're an attacking team but we like to be able to play a mixture of styles.

"We can sit deep and play on the counter-attack, as well as being comfortable if we have lots of possession of the ball."

The immediate priority for boss Arrasate, who stepped up from the assistant role following Montanier's summer departure, is finding a way for strikers Agirretxe, Griezmann and Vela, supported by summer signing Haris Seferovic, to start finding the back of the net once again.

The front trio have scored just five league goals between them so far this season, after mustering an excellent combined tally of 37 in 2012-13, and Saturday's 2-1 win at Valencia was the first time since the end of August that Sociedad had scored more than once in a game.

Prieto firmly believes the goals will soon start to flow, saying: "Our strikers are fast and technically good, they work hard and they are capable of penetrating defences.

"They have a lot of quality and they are very dangerous for opposing teams. They scored a lot of goals last season which really helped the team, and I think it will happen again."

Wednesday night would not be a moment too soon.