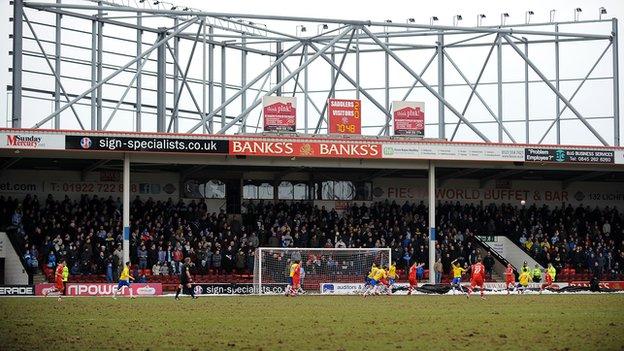 League One club Walsall have bucked the overall trend in English football by turning in a small trading profit of £23,000 for the 2012-2013 season.

In a campaign which started badly when they entered December on the back of a 16-game winless run, Dean Smith led his team to a final position of ninth, just six points shy of a play-off place.

The Saddlers even suffered a slight fall in average attendances to 4,234.

But having one of League One's smallest playing budgets proved a key factor.

The added impact of the profit made by the club last season, who owe a lot to the success of their off-field commercial activities, is that the accounts do not include the six-figure summer departures of Will Grigg to Brentford and Jamie Paterson to Nottingham Forest.

Club chairman Jeff Bonsor said: "I believe this represents a significant achievement, when you consider the findings of the latest annual review of the Football Finance Report, published by Deloitte in June 2013, which established that the average net loss for a League One club in 2011/12 was £2.4m.

"Pleased to note that not only are Walsall playing great football, but they are still a profit-making business. It'll never catch on!"

"It is also worthy of note that this profit was achieved despite a fall in Central Television revenues of 26% as a direct result of a reduction in the Football League's new TV deal with SKY.

"Consequently, the club had to adjust and reduce its 'player budget' by a similar amount to compensate and this was done in a controlled and constructive manner.

"It was a significant year for the club on the field as the first team recorded their highest league finish since 2003-04 and achieved their highest points total in League One since it was rebranded back in 2004.

"Both were accomplished on the back of one of the smallest playing budgets in the division and the smallest the club has operated with in many years."

It is the second season running that Walsall have reported good news, having announced a £10,000 profit for 2011-12.