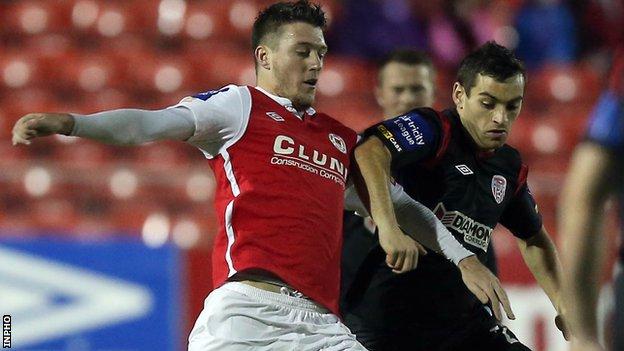 Derry City are a point ahead of Shamrock Rovers in the battle for fourth place in the Premier Division after this draw with St Pat's Athletic.

The team which finishes fourth may earn European qualification for next season.

Barry McNamee took a touch before stroking the ball under the diving body of Brendan Clarke in the 34th minute.

Substitute Anto Flood's speculative effort from 20 yards out on the left wing dipped into the far corner of Ger Doherty's goal with nine minutes left.

The match got off to a pulsating start and Doherty produced a fine early reaction save from Sean Gannon.

Clarke was was equal to a Michael Rafter shot and then Patrick McEleney struck the bar with another effort.

Doherty denied Christy Fagan before Ryan Curran slipped the ball through to the unmarked McNamee, who broke the deadlock.

In the second half, Ian Bermingham fired into the side-netting, before Flood levelled for the newly-crowned league champions.

Shamrock Rovers triumphed 4-1 at UCD so Derry need a win over Limerick City in their final league match at the Brandywell next Friday to ensure a fourth-placed finish.