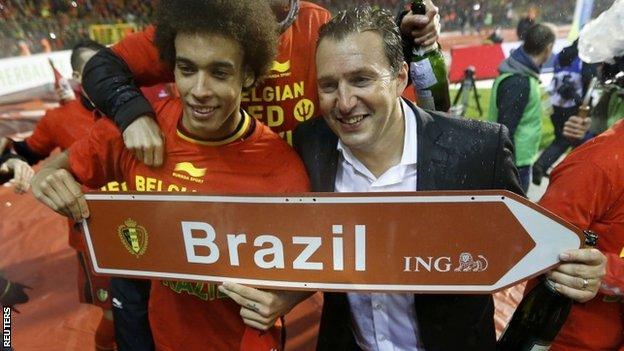 Belgium and Switzerland will both be seeded for the 2014 World Cup draw, Fifa confirmed on Thursday.

But 2006 champions Italy and 2010 runners-up the Netherlands will not be among the seeds in Brazil.

The Dutch do have an outside chance of being added to the seeded teams - but only if sixth-ranked Uruguay lose their qualifying play-off with Jordan.

Hosts Brazil - ranked 11th - plus the top seven teams in the Fifa world rankings make up the seeds.

Spain, Germany, Argentina and Colombia are all among them but Italy, who slipped four places to joint eighth after last week's 2-2 draw with Armenia, miss out despite winning their qualifying group.

The Azzurri are ranked alongside the Netherlands, but placed below Louis van Gaal's men on current form.

England rise to 10th in the rankings, but are not seeded.

Belgium secured their 2014 finals place by winning Group A ahead of Croatia, in a pool that also featured Wales and Scotland, while Switzerland finished above Iceland as Group E winners.

The new Fifa rankings will also be used to work out the seeds for the European play-off draw Monday.

The 1998 World Cup winners France have slipped to 21st in the rankings and will have to beat one of the four seeded teams - Portugal, Greece, Croatia and Ukraine - if they are to reach the finals.